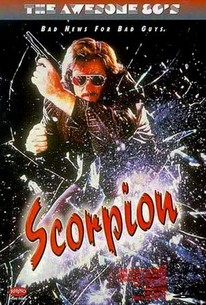 This martial arts film features Tonny Tulleners (a karate champion) as a U.S. government agent who goes after international terrorists in some picturesque locations: Amsterdam, Los Angeles, and Hawaii. His terrorist-fighting takes on another complexion when he is required to protect a terrorist who is going to testify against his former cohorts. Soon the glamorous locations are transformed into the interiors of bedrooms and hospital wards as the body count rises.

Luis Marugon
as Man on Donkey

Bill Sherwood
as Agent in Cessna

Rebecca Shinall
as Girls in Stateroom

Wendy West
as Mother in Park

There are no critic reviews yet for Scorpion. Keep checking Rotten Tomatoes for updates!

There are no featured audience reviews yet. Click the link below to see what others say about Scorpion!