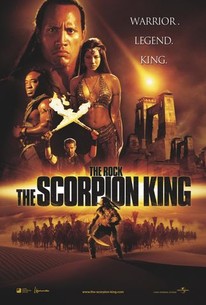 Critics Consensus: Action adventure doesn't get much cheesier than The Scorpion King.

Critics Consensus: Action adventure doesn't get much cheesier than The Scorpion King.

Critic Consensus: Action adventure doesn't get much cheesier than The Scorpion King.

The Rock has his first starring role in this prequel to The Mummy films, which was developed while The Mummy Returns was still in production. The film takes place in ancient times, when a mighty swordsman, Memnon (Steven Brand, making his film debut) ruled over nearly all the known world. Memnon, a brutal tyrant, defeats his enemies in battle with the help of a beautiful sorceress, Cassandra (Kelly Hu), who can predict the future. The last of the "free tribes" form a fragile alliance to fight Memnon, and hire a trio of Akkadian assassins, led by Mathayus (pro wrestler The Rock, who made his big-screen debut as this character in The Mummy Returns), to kill the sorceress and thus remove Memnon's advantage. Balthazar (Michael Clarke Duncan of The Green Mile), the powerful leader of the Nubians, objects to hiring mercenaries, but the plan goes forward. The assassins are betrayed by Takmet (Peter Facinelli), the son of one of the tribal leaders, and Mathayus finds himself unable to kill Cassandra. Thanks to the unlikely machinations of Cassandra, and the aid of a horse thief, Arpid (Grant Heslov of True Lies), Mathayus escapes to the desert. He eventually abducts Cassandra, who explains that Memnon was holding her against her will. Mathayus thwarts Memnon's efforts to re-capture Cassandra, then uses his newfound sense of justice to convince the surviving tribal leaders to join forces again to defeat Memnon. The Scorpion King was directed by Chuck Russell. Jonathan Hales (Star Wars: Episode II - Attack of the Clones) was credited with the story, and WWF owner Vince McMahon has an executive producer credit. The film, which was shot in the U.S. (very unusual for a big action film), reportedly underwent extensive re-shoots when the first cut came in with a running time of 70 minutes. ~ Josh Ralske, Rovi

Sean Michael
as Boy at Well

Brandon Gonzalez
as Boy With Dates

Ralf Moeller
as Thorak
View All

Critic Reviews for The Scorpion King

On the silly popcorn scale, it works pretty well.

All the necessary exposition prevents the picture from rising above your generic sand 'n' sandal adventure.

Russell lacks the visual panache, the comic touch, and perhaps the budget of Sommers's title-bout features.

Wimps out by going for that PG-13 rating, so the more graphic violence is mostly off-screen and the sexuality is muted.

Cry havoc and let slip the dogs of cheese, indeed.

Just as much big, dumb fun as an A-grade B-movie should be.

The effects are terrible, the comedy falls flat and the story is an utter mess.

It's hard to follow and doesn't reward the effort of following it. It's not good drama, and it's not good spectacle.

Boasting sword-and-sandal action more sluggish than a Ye Olde Renaissance Faire, The Rock putting someone through a table would be a welcome anachronism. "The Scorpion King"? More like "Moron the Barbarian."

Come for the cheese, stay for Kelly Hu.

A ridiculous though not entirely unpleasant way to while away ninety-two minutes.

Audience Reviews for The Scorpion King

More hype than delivery, follow Mr. Dwayne Johnson as he unbelievably waltzes into a fullblown Hollywood movie career playing the same guy he played in the wrestling "arena". Watch as he himself cannot hide his incredulous amazement at his good fortune. In the climatic scene the villain manages to slice the Rock's shirt clean off ... this is light entertainment for the youth in your house.

So oddly enough this character was actually loosely based on a real Egyptian leader which does make things a little more interesting, not a franchise saver by any means but its cool to read up on it. This spin off is set 5000 years before the events of 'The Mummy' which does seem rather a long time to me. Great title, slightly dull execution, we all knew what to expect here, Johnson running around half naked killing endless enemies with no apparent fighting skills. I will be completely truthful here and say this film isn't too bad, if you squint at it its almost pretty good, the fights are solid along with the stunts, cast does the job for the type of film this is and more importantly it actually looks good without any silly cgi to spoil the broth. If you took out the historical setting you could quite easily say this was a sequel/prequel to the 'Conan' franchise really, its your basic swords n sorcery fantasy just without any monsters, its better than the recent official Conan effort. So yeah...this is not too bad, Kelly Hu looks lovely and Johnson is clearly learning the ropes showing promise.

Well its okay, it'll suffice as a prequel because i doubt you'd get any better! Its good enough in the action front and special effects! Theres nothing to special about this movie but its fun enough!

Third entry of The Mummy franchise tells the story of Thew Scorpion King which you'd expect that they would make something good, but unfortunately; it is not to be. The Scorpion King is a terrible action film that has poor story and even poorer acting. The cast for this film is terrible and really most of them seem out of place\. It's a shame because The Scorpion King could have been a terrific film, but it ends being one bad film. The Rock is not so good as The Scorpion King even though he looks cool in the part. Instead of delivering an awesome actioner, director Chuck Russell tones down the blood and plays it safe to secure a PG-13 rating. If this film would've been rated R, I think there could have a lot more accomplished in terms of action. Also like I've said, the story fails and mimmicks tother towering sword & sandle epics of old to very bad results. The film feels stupid, and though its slightly entertaining at times, you can't shake the feeling that it's a poorly made action film. The idea is good, the execution is terrible. They could have done something cool with the story, but it feels to simple and lacks anything great. I've the same action scenes before, it's nothing new. The film is cliched with a bad cast and a bad story. If the screenwriters would've tried a little harder they could've written a superb script and ended up with a film that would've entertained you. Instead the film insults the viewer with barely anything truly original to offer, this will make anyone watching it want his hour and a half back