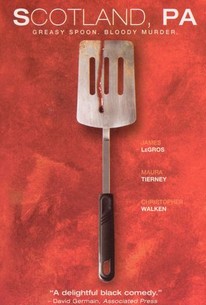 Critics Consensus: Though it's not as good as it could have been, Scotland PA shows cleverness at utilizing its premise.

Critics Consensus: Though it's not as good as it could have been, Scotland PA shows cleverness at utilizing its premise.

Critic Consensus: Though it's not as good as it could have been, Scotland PA shows cleverness at utilizing its premise.

What happens if you take one of William Shakespeare's darkest tragedies and move it to a burger joint in the early 1970s? The answer can be found in the satiric comedy Scotland, PA, the first feature from writer and director Billy Morrissette. Mac McBeth (James LeGros) is a hard-working but unambitious doofus who toils at a hamburger stand alongside his wife Pat (Maura Tierney), who has a significant edge in the brains department. Pat is convinced she could do a lot better with the place than their boss Norm Duncan (James Rebhorn) is doing, so she works up a plan to usurp Norm, convincing Mac to rob the restaurant's safe and then murder Norm, using the robbery as a way of throwing the police off their trail. Though two stoners (Andy Dick and Timothy Speed Levitch) and a would-be fortune teller (Amy Smart) warn Mac that bad luck awaits him, he gathers his courage and goes through with his wife's scheme. At first, things seem to have gone just as Pat hoped, and after Norm's sons (Geoff Dunsworth and Tom Guiry) sell the restaurant to the McBeths (they pay for it with the money they stole from Norm), business takes off. But vegetarian police detective McDuff (Christopher Walken) is convinced there's foul play at the new center of the fast food universe, and when the McBeths fear that fry cook Banco (Kevin Corrigan) knows more than he's letting on, Pat decides another murder is on the menu. Scotland, PA premiered at the 2001 Sundance Film Festival; incidentally, Shakespeare does receive screen credit for his contribution to the story.

John Cariani
as Ed the Cop

Timothy Durkin
as Frank the Pharmicist

Michael Marinoff
as Guy in Band

Richard Shepard
as McStreaker
View All

There are some truly wacky parallels with Shakespeare's play.

It's simple, sizzly and very funny.

The fun is infectious -- the puns, in-jokes and referential asides will keep Shakespeare buffs busy and the rest of the audience entertained even as some punch lines zing over their heads.

A trailer-trash version of Macbeth that should be avoided like an Elizabethan pox.

Scotland, PA is Macbeth done with bell-bottoms, fast food and absolutely no pretension. It's that last bit that makes this amiable, shaggy Shakespeare satire so engaging -- and so disposable, too.

This should have been a black comic masterpiece.

... can't be dismissed as a vanity project

A slyly macabre fantasia that works on its own demented terms.

It's as nourishing as a Big Mac with fries.

It's a setup so easy it borders on facile, but keeping the film from cheap-shot mediocrity is its crack cast.

An uneven parody that sometimes amuses but just as often annoys.

A bit bumpy in execution but an interesting take on updating MacBeth.

Terrible. This goes to show that Christopher Walken really will do anything he is offered. It also proves that Andy Dick must die. Only good part: McBeth shoves a hamburger in vegetarian Walkens mouth as he tries to kill him.

To become king -- of the fast food industry. A wonderful transposition of the MacBeth tragedy. Yeah, it's true, a thousand years ago I guess killing MacDuff's family might have somehow helped expedite the plan, but we're talking the 1970s here, so it really strikes me as more efficient to get right to the root of the problem: Will the power driven James LeGros, spurred by his ruthless soulmate, kill big city cop Chris Walken before the wily veteran vegetarian detective discovers the truth about this twisted couple's grisly push to the top of all fast foodom?

The biggest revelation for me in this one is the job Maura Tierney does of descending very believably into the depths of madness. As Lady MacBeth, she works that oil burn as the sign of blood on her hands to true perfection.

If for nothing else --

although it is Shakespeare, after all, so even if it sucked, I'd still feel a need to give it a viewing --

you must see this for Tierney's performance. I'm pretty sure she's a TV veteran, although I don't know what show(s), but I really cannot remember ever seeing her in films before. I can't even guess how old she might be, but she is a comer. I'll be on the lookout for more good work from her. A late bloomer perhaps?