Scott Pilgrim vs. the World2010 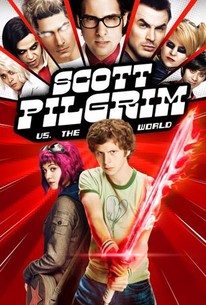 Critics Consensus: Its script may not be as dazzling as its eye-popping visuals, but Scott Pilgrim vs. the World is fast, funny, and inventive.

Critics Consensus: Its script may not be as dazzling as its eye-popping visuals, but Scott Pilgrim vs. the World is fast, funny, and inventive.

Critic Consensus: Its script may not be as dazzling as its eye-popping visuals, but Scott Pilgrim vs. the World is fast, funny, and inventive.

Scott Pilgrim vs. the World Videos

Scott Pilgrim vs. the World Photos

Based on Bryan Lee O'Malley's Oni Press comic book of the same name, Scott Pilgrim vs. the World follows the eponymous slacker rocker on his colorful quest to defeat his dream girl's seven evil ex-boyfriends. Twenty-two-year-old Scott Pilgrim (Michael Cera) may not have a job, but rocking the bass for his band, Sex Bob-omb, is a tough job unto itself. When Scott locks eyes with Ramona Flowers (Mary Elizabeth Winstead), he knows she's the girl he wants to grow old with. But Ramona has some serious baggage; her supercharged exes rue the thought of her being with another man, and they'll crush any guy who gives her a second glance. Now, in order to win Ramona's heart, Scott will do battle with everyone from vegan-powered rock gods to sinister skateboarders, never losing sight of his gorgeous goal as he pummels his way to victory. Shaun of the Dead's Edgar Wright directs the film from a script he penned with Michael Bacall. Superhero veterans Chris Evans and Brandon Routh co-star in the action comedy as two of the seven ex-boyfriends. ~ Jason Buchanan, Rovi

Benjamin Lewis
as Other Scott

Ben Lewis
as Other Scott

Michael Lazarovitch
as Some Guy

Will Seatle Bowes
as Party Goer

Bill Hader
as The Voice

News & Interviews for Scott Pilgrim vs. the World

New on Netflix in September
Rank Brie Larson’s 10 Best Movies
Level Up: Why Scott Pilgrim vs. The World Endures As A Cult Favorite Beyond Its Geek Appeal

View All Scott Pilgrim vs. the World News

Critic Reviews for Scott Pilgrim vs. the World

Energy and invention and audacity count for little unless you can sense something at its core - unless a film gives you something to feel - but there is zilch here. It's hollow.

It's fresh, funny, inventive and unique.

Scott Pilgrim vs. the World becomes a fatal case of flash over substance. Pretty great flash, though.

This is a flashy filmic landscape of expertly choreographed fight sequences and bubble-written onomatopoeia splattered across frames.

So much of the film is completely nonsensical, bringing new meaning to the notion of a live action video game movie.

Scott Pilgrim vs. the World stands out as a film adaptation that loves its source material's medium as much as it loves its stories.

Light as a feather, driven by a near-perfect soundtrack, this movie is still as fresh and innovative today as it was a decade ago.

Audience Reviews for Scott Pilgrim vs. the World

though i haven't read the graphic novel seeing this film really makes me want to. Its definetly the most creative film ive seen in years. Great effects, hilarious jokes like the part where the chinese girl comes over and scott leaps out the window, it brings to mind the moment from the wizard of oz where the lion gets so scared that he runs out the window. i also love the use of classic video game noises such as the sonic the hedgehog ring collection sound, the mario shrink noise, and the zelda link to the past music and sound effects.

"It's not what you say ... it's how you say it, dearie." Words I've dreaded my whole life, that style wins over substance, but here's a film that argues just that point and definitely brings it's "A" game to the court, and frankly I'm left speechless. And this after a slew of films based on vidgames here at last is a movie filmed as if it were a vidgame. Simply a work of art, it will not go gently into that dark night of forgotten culture and might well be the one that all of the actors in it will be remembered by.

This movie is so much fun!!! I dont even know where to begin. Totally new and offbeat.

Scott Pilgrim vs. the World Quotes