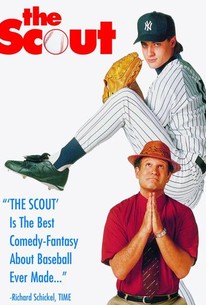 After several weeks filming The Scout in the late 1970s, star Peter Falk and director Howard Zieff abandoned the project. Two decades later, writer Andrew Bergman gave his original script to Albert Brooks and Monica Johnson, who polished it as a vehicle for Brooks and director Michael Ritchie. Brooks stars as Al Percolo, a talent scout for the New York Yankees whose latest recruit (Michael Rapaport) has just vomited on the field and fled. Sent to Mexico as punishment by his boss (Lane Smith), Percolo finds phenomenal young pitcher Steve Nebraska (Brendan Fraser). Before he can get back to the Big Apple, however, Percolo gets pink-slipped by the Yankees, so he offers Nebraska as a free agent. After a stellar tryout, Nebraska is signed for millions. Soon after, he starts to exhibit odd behaviors that may be linked to psychological problems. A psychiatrist (Dianne Wiest) hired by the ball club wants Nebraska in daily therapy, so Percolo ends up babysitting a mentally unstable pitcher. Brooks's normally winning mix of laughs with psychological insights didn't add up to box office or critical success, despite cameos from real-life sports figures such as George Steinbrenner and Steve Garvey. ~ Karl Williams, Rovi

John B. Sterling
as Himself
View All

Critic Reviews for The Scout

The Scout is the best comedy-fantasy about baseball ever made, which goes to show that if Hollywood keeps trying, eventually someone will get it right.

Even with the modest allure of Albert Brooks in what amounts to a mainstream effort, The Scout should get a quick trip to the showers.

The Scout was directed by Michael Ritchie and written by Mr. Brooks and Monica Johnson from a script written by Andrew Bergman years ago. It's probably not all that valuable to wonder how so many talented people went so wrong.

Having sat through many a Fraser film, I am constantly amazed that there is nothing this boy can't do. Well, except act his way out of a paper bag.

Rarely does a movie start high and go downhill so fast. It's as if the filmmakers progressively lost their nerve with every additional scene.

It's been a long time since there's been a good baseball movie. The Scout makes you wonder if there's ever going to be one again.

An amusing comic premise, mixing baseball and psychiatry, gets lost along the way in a film that displays much evidence of post-production tampering.

Brooks is fun, nothing else in the movie is.

This is the laziest piece of work in the fall big-screen lineup so far.

The Scout proves to be an unsatisfying single that should have been a home run.

A genuine -- and immensely enjoyable -- curiosity.

Audience Reviews for The Scout