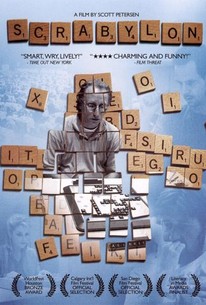 The National Spelling Bee got its documentary profile, Spellbound, and now America's favorite word game goes under the nonfiction microscope in Scrabylon, a portrait of the various eccentrics who make Scrabble playing their lifelong obsession. Director Scott Petersen follows the highs and lows of nearly two dozen Scrabblephiles as they work their way to the 2001 World Scrabble Championships in Las Vegas. Among the "celebrities" he encounters: the gregarious Chris Cree, a Texas forklift salesman and avid gambler who takes breaks from his Scrabble competitions to spend time at the craps tables; NPR commentator Stefan Fatsis, an avid player whose book on the subject, Word Freak, made headlines in 2002; Matt Graham, a comedian and writer for Saturday Night Live and Late Night With Conan O'Brian; and "G.I." Joel Sherman, a man with severe gastrointestinal difficulties who actually makes his living playing Scrabble.

There are no critic reviews yet for Scrabylon. Keep checking Rotten Tomatoes for updates!

There are no featured reviews for Scrabylon at this time.