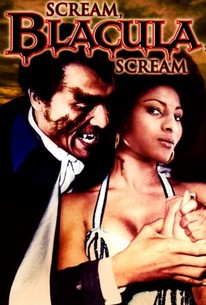 In this horror sequel from the director of Count Yorga, Vampire, a member of an American voodoo cult revives the fanged Prince Manuwalde (William Marshall), only to become his slave. Manuwalde then puts the bite on various victims, but finds himself fixating on pretty Lisa (Pam Grier), a voodoo princess whom he believes can finally put his soul to rest. Lynne Moody, Nicholas Worth, and Bernie Hamilton are among the familiar cast, but the various occult trappings seem somewhat out of place in the modern Los Angeles setting and the production values are pretty shabby. Blaxploitation and camp fans should still find it mildly amusing, however, and Shakespearean actor Marshall is a lot of fun as the obsessive vampire.

Nicholas Worth
as Dennis

Anita Bell
as Woman
View All

Scream Blacula Scream does better than Blacula at playing up Marshall's magisterial power, but gone is the tragedy that underpinned the original.

Blacula was a drama first and a horror and blaxploitation enterprise after that. Scream Blacula Scream is a blaxploitation horror film that takes its influence not just from its predecessor, but the burgeoning subgenre as the whole.

Scream Blacula Scream is a tad more polished than its predecessor but also a tad less fun, with too much time spent on dull or annoying characters.

Blacula becomes something of a slave-master, even as he disdains humans who exploit other humans. 'You made a slave of your sister, and you're still slaves, imitating your slave masters!' he lectures a pair of pimps before tossing them through a window.

Even though it has a few chilling and comical moments, overall it drags and doesn't have much of a bite.

A unworthy sequel to a good idea.

I was really disappointed with this Blacula sequel. What was up with all the stupid voodoo stuff? Voodoo has zombies, not vampires, I think. Anyway, it's way worse than the first one.

This, the follow up to "Blacula" is a little bit more campy (both in general, and in a stereotypical blaxploitation way), but not quite as fun or good. It's okay enough, but is noticeably less good, and that's a disappointment. The tie-in with voodoo is decent I suppose, but the film just leaves a lot to be desired. Also, it's maybe a couple of minutes longer than its predecessor, but the terrible pacing makes it feel at least 30 minutes longer. Too bad it drags, because this could have been a real scream (hehe). William Marshall returns as Mamuwalde/Blacula, and onces again gives a good performances (far better than he needs to, really). With his hight and booming deep voice, he makes for a striking and imposing vampire. Pam Grier co-stars in this (much to my delight), and, while her performance is good, ishe's been better. Unfortunately, neither she nor Marshall can fully save this, but they do ensure that the film is still watchable. The original was no masterpiece, but they at least tried to aspire to somehting beyond mere exploitation. This is just lazy. I do still kind of recommend it, but only for the absolutely curious.

That's just what this movie was, a Scream. Its a pretty cool movie that's for sure, I was very surprised that this movie has been out this long and I have never seen it. Blacula is a African Vampire, guess there kind of different because when they hunger blood they turn into kind of wolf man look guy, but the other vampires look a little more like zombies. Anyway this movie is loaded with stars from the 1970 time frame. Its a fun movie, clean and you will enjoy the 70'ties cloths and backgrounds. No less then a 4 on this one, as far as the fright meter I wouldn't go above 2 as its more funny then scary. Enjoy, oh and its going in my collection.

"Scream Blacula Scream" is a funky and fun to watch sequel to "Blacula" which brought Vampires into Blaxploitation cinema for the first time the year before. The success of "Blacula" also spawned a bunch of other Blaxploitation Horror flicks, such as "Blackenstein", "Ganja & Hess" or "Abby". The sequel basically has the same qualities and faults as the original. "Scream Blacula Scream" once again delivers a groovy 70s feeling, and William Marshall is more than cool in the eponymous role. What makes this film especially worthwhile is the casting of the queen of blaxploitation, the wonderful Miss "Coffy" and "Foxy Brown" herself, Pam Grier. I also liked how Voodoo was added to the plot. While it is again a cool film with a funky atmosphere "Scream Blacula Scream" is (as it was the case with the original) never creepy or scary in any way. Mamuwalde alias Blacula (William Marshall) is resurrected by voodoo. As in the first part, Mamuwalde is not really a villain, but merely a tormented soul, who cannot help but turn into Blacula to satisfy his thirst for human blood in order to survive. Soon after his resurrection, he runs into Lisa (Pam Grier) a beautiful young woman who has particularly powerful Voodoo-skills... What follows are 90 minutes of goofy, but entertaining fun in funky 70s style. This is certainly no highly memorable blaxploitation effort, but it is a good time-waster and definitely fun to watch.