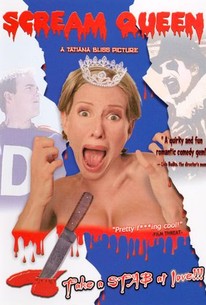 Liz Lavoie and Nipper Knapp co-star in the ultra-low-budget exploitation feature Scream Queen. Lavoie plays the heroine of the title, Dana Lewis - a B-movie actress summoned for the lead role in an independent feature film. She mistakenly reads it as a high-profile project that will work miracles for her career, but has a change of heart when she meets the eccentric director (Knapp) and his film crew, chock full of creepy eccentrics. Dana nonetheless manages to fall in love, amid numerous splatter-filled encounters with zombies and knives. Writer-director-producer Tatiana Bliss helms the picture.

The humorous look at low budget filmmaking and the challenge of an actress getting too old to play a virgin, bloody teenager is inspired.

'They try, oh they sure try, but they fail.'

Scream Queen is like sex with an ex. You know it's going to be bad when you put it in, you know you'll feel guilty for enjoying it, but you just can't help yourself.

The problem is that it does not know whether it wants to be a parody or a straight film. And when it opts for both simultaneously, Scream Queen is a derivative miss.

Scream Queen may be low-budget and a bit rough around the edges, but it's easily more amusing and endearing than 85% of what normally passes for "America's #1 Comedy Three Weeks in a Row!"

There are no featured reviews for Scream Queen at this time.