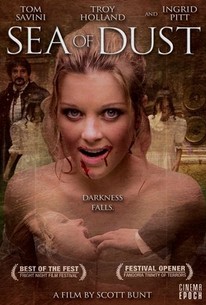 First time director/screenwriter Scott Bunt pays tribute to the classic Hammer Studio films of yesteryear and the stylish shockers of director Mario Bava with this gruesome tale of an oppressive evil that washes over a small village of innocents. Inspired by the gruesome legend of Prester John, Sea of Dust traces the monstrous villain's efforts to sacrifice the "psychologically vulnerable" at the alter of evil. A diabolical ideology has been unleashed on the land, and as the young and pure of heart are forced to suffer unimaginable torture, a desperate few set out in search of answers. But time is running out fast, because Prester John (Tom Savini) and his sadistic disciple Anna (Ingrid Pitt) are hell bent on wholesale slaughter. An epic social satire disguised as a blood-soaked Grand Guignol horror film, Sea of Dust features gruesome special effects work by Josh Turi (Wendigo, Unfaithful), and supporting performances from Stuart Rudin (Silence of the Lambs) and Bill Timoney (All My Children).

Critic Reviews for Sea of Dust

There are no critic reviews yet for Sea of Dust. Keep checking Rotten Tomatoes for updates!

Audience Reviews for Sea of Dust

A mythological crusader king possesses the bodies of 19th century Germans to manifest his sadistic religious ideology in this world. An attempt to recreate a Hammer-type period atmosphere with community-theater level acting, gore, and a heavy-handed anti-religious message, but if you crave B-movie weirdness and can get through the first half, it turns into a crazed and confusing "dreams inside of dreams" battle for the protagonist's soul that should keep you watching.