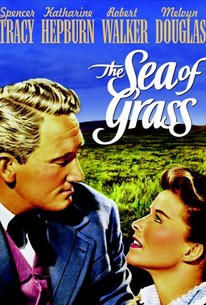 The Sea of Grass Photos

Usually associated with erudite, urbane comedies, the legendary screen team of Katharine Hepburn and Spencer Tracy goes intensely dramatic in the expensive western Sea of Grass. Tracy plays cattle baron Colonel James Brewton, who staunchly opposes opening the western frontier to homesteaders. Standing steadfastly beside Brewton-at least at the beginning--is his headstrong wife Lutie (Hepburn). Eventually disillusioned by the stern implacability of her husband, Lutie leaves Brewton and goes off to Denver, where she falls in love with liberal attorney Brice Chamberlain (Melvyn Douglas), the champion of the homesteaders' cause. Upon giving birth to Chamberlain's son, Lutie confesses her indiscretion to Brewton, who takes the news with commendable restraint, even offering to accept the baby as his own. Unfortunately, the Brewtons' standing in the community is weakened by the revelation of Lutie's infidelity, causing her to leave her husband for a second time. Years later, Lutie's grown-up boy Brock (Robert Walker) drifts to the wrong side of the law, leading to his death at the hands of a posse. Though it hardly seems possible under the circumstances, Brewton and Lutie are at long last reconciled through the intervention of their daughter Sara Beth (Phyllis Thaxter). Elaborately produced in the traditional MGM manner and adroitly directed by Elia Kazan, Sea of Grass is still one of the lesser Tracy-Hepburns.

Chief Many Treaties
as Indian

Charles B. Middleton
as Charley

Critic Reviews for The Sea of Grass

It seems wasteful to let two such good, attractive actors wander through a lavish production like thoroughbred somnambulists.

To the credit of Elia Kazan, it must be said that his direction has pace, but the writers and others have betrayed him.

Spencer Tracy, as the rugged individualist, does his best to look monumental and inspired. But the inspiration seldom gets off the ground.

Fails to deliver the required action for a western.

At 131 minutes, this sprawling western was long on talk and short on action.

Kazan had only made one previous film, and the stilted melodrama reflects the director's inexperience as he failed to get more than adequate performances from the two leads, whom he felt intimidated by.

Audience Reviews for The Sea of Grass

Minor entry in the Hepburn/Tracy canon is justifiably obscure. The script is long winded but not terribly deep. As far as the performances Spencer Tracy is right at home as the rigid man whose pride works to his detriment but Kate seems uncomfortable in her role and it doesn't really fit her, a wounded dignity is needed and her tough resilience is at odds with that, Margaret Sullavan would have been much better suited to the part. The basic structure of the film works against what was always so special about the pair and that's their interaction, for great swatches of this they are apart. Robert Walker shows up late in the proceeding and injects some much needed life in the picture but is gone too soon. One good piece of casting is Phyllis Thaxter as the pair's grown daughter, she bears a striking resemblance to both and really does seem as if she could be their child. The best performance in the whole show is turned in by the reliable Edgar Buchanan as the family standby, his involvement with the others is one of the few parts that doesn't feel artificial. The usually reliable Melvyn Douglas is defeated by a stick figure character. The pace of the film is too slow, this was an early film for Kazan and he still had some learning to do, and by the end it becomes a trial too sit though. Not awful but a miss.

The Sea of Grass Quotes