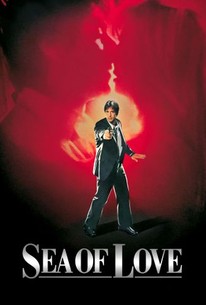 In this thriller, Al Pacino stars as Frank Keller, an alcoholic policeman in the depths of middle-age crisis. Frank begins investigating a serial killer who finds her victims through the personal ads and kills them while the song "Sea of Love" plays on the stereo. Responding to one of the ads, Frank finds himself falling in love with the sultry blonde Helen (Ellen Barkin), who happens to be the most likely suspect. Aside from Richard Price's crackling script, one of the most remarkable things about Sea of Love is Pacino's riveting performance. It was the first in many years to gain considerable critical acclaim and box office success, making the movie instrumental in his comeback in the late '80s and early '90s. Pacino doesn't over-act in Sea of Love, which gives its tense story more suspense, and helps make the somewhat far-fetched plot believable.

News & Interviews for Sea of Love

View All Sea of Love News

Critic Reviews for Sea of Love

Efficient enough as a thriller, but what makes this mandatory viewing is the return of Pacino.

A lugubrious imitation of a second-rate television movie, over-produced and over-cast.

Price and director Harold Becker build in enough jumps and scares and good red herrings to be satisfying ...

A bluesy thriller with a clever though not overly complicated premise.

What impressed me most in the film was the personal chemistry between Pacino and Barkin. There can be little doubt, at this point, that Barkin is one of the most intense and passionately convincing actresses now at work in American movies.

...a slow-moving thriller that's oftentimes just a little too deliberate for its own good...

Sea of Love is unrestrained and completely hypnotic...

Sea of Love has its Cinemax lapses in taste, but most films of the genre lack sophistication from which to lapse.

Mediocre thriller with a good cast. I never want to hear that [expletive deleted] song again.

Audience Reviews for Sea of Love

"in the style of Alfred Hitchcock"? "with ......... surprising plot twists"? I rather felt it as just another cop flick. The story is ordinary one and the execution isn't any great either. A few good moments is all. 1/5 (0.75 for the flick's casting & performances, and the rest for the rest).

Al Pacino's lonely detective sets himself up as bait for a serial killer stalking newspaper dating ads and lands in the sack with slinky Ellen Barkin, commencing an effective game of nutjob-or-not? (as later ripped off by Basic Instinct). Achingly '90s in tone with a sultry sax-heavy jazz soundtrack to boot, the whodunnit is greatly assisted by Pacino toning down the mugging, John Goodman being... John Goodman and Barkin scorching up the screen, skillfully avoiding that old style over substance adage.

I can remember watching this on tv more than once growing up. Always liked it, but literally have not seen it since I was a teenager. The story is that a killer has been targeting men who answer personals ads. Believing it could be a woman, cop Frank is sent undercover to meet some possible suspects by placing an ad himself. He is answered by Helen, and the two get involved. I have to say, it pretty much holds up. The 80's hair and fashion is dated, but Ellen Barkin still looks attractive and really carries the movie in her is-she-psycho-or-isn't-she way. I don't know that Al Pacino and her ever entirely convince as a couple, and some of the sex scenes are more laughable than hot, but you can overlook it, as for the most part, both are good in their roles. Both lonely flawed people, with just a shadow of a doubt over Helen's sanity. You never entirely believe it could be her, but there's just enough coincidences to give pause. Good suspense movie and some nostalgia to top it off. Could not ask for more!

Al Pacino attempted to save his career with the cop thriller Sea of Love which kicked the era of Pacino playing detectives into overdrive. Pacino plays Detective Frank Keller, a burnt out cop whose wife has left him leaving him lonely and drunk most of the time. His begins a homicide investigation into an almost execution style slaying in which the victim is found nude on the bed while a 45 rpm record of "Sea of Love" plays in the background. More murders pile up leading them to a personal column. Keller and his partner Sherman (John Goodman) go undercover by writing an ad and going on "dates" with numerous replies. It's on one of these "dates" that Keller meets Helen Cruger (Ellen Barkin) who develops a relationship with Keller and also slowly becomes the investigations chief suspect. Sea of Love is your paint by numbers crime thriller. It's a predictable piece that, even though its characters are well defined and acted, tends to follow a treasure map to the prize at the end- the big reveal. The big reveal is satisfying and when you think about it actually makes sense (as opposed to other films of this ilk). Pacino gives us an OK performance. Certainly not his best, but it's been a lot worse. Barkin is great as the femme fatale, sexy with an attitude. John Goodman plays the sidekick without being the funnyman to Pacino's straight man. Overall this is a slightly above average film that delivers as promised just like the hundreds of other movies before and after it.