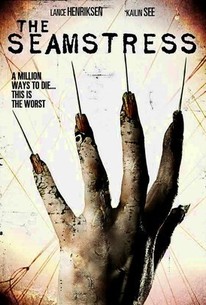 Allie's father has disappeared on an island, and she wonders if his connection to an old crime is responsible. A woman was brutally killed by an angry crowd, and her murderous ghost haunts those responsible for her death. While Allie and her friends search for her father, people start dying in increasingly horrifying ways. Lance Henriksen stars in this horror film directed by Jesse James Miller. ~ Kimber Myers, Rovi

Andee Frizzell
as The Seamstress

Norman Misura
as The Superindendent

Critic Reviews for The Seamstress

The Seamstress is more yawn than yarn.

Audience Reviews for The Seamstress

A good (but short) horror flick with a very interesting\creative antagonist.