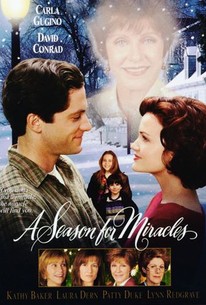 The Yuletide Season is anything but merry for Emily (Carla Gugino), who is forced to take charge of her nephew J.T. (Evan Sabara) and niece Alanna (Mae Whitman) when their drug-addicted mother (Laura Dern) O.D.'s and the kids are dispossessed. When it looks as though the kids will be sucked into the merciless maelstrom of the foster-care system, Emily packs them up and heads out of her home state, ending up in a little town that happens to be named Bethlehem Even though the authorities have been temporarily left behind, Emily will need a miracle to keep her family together. Enter a versatile guardian angel (Patty Duke), who assumes a variety of earthly guises to save the day for Emily, J.T. and Alanna--and also orchestrates a romance between Emily and a sympathetic local cop (David Conrad). Based on a novel by Marilyn Pappano, A Season for Miracles first aired as a CBS Hallmark Hall of Fame presentation on December 12, 1999.

Critic Reviews for A Season for Miracles

There are no critic reviews yet for A Season for Miracles. Keep checking Rotten Tomatoes for updates!

Audience Reviews for A Season for Miracles

There are no featured audience reviews yet. Click the link below to see what others say about A Season for Miracles!

A Season for Miracles Quotes