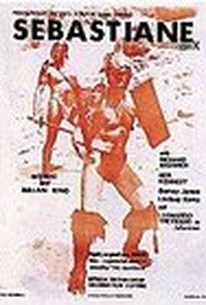 Filmed entirely in vulgar Latin, this experimental film recounts the life of Sebastiane, a puritanical but beautiful Christian soldier in the Roman Imperial troops who is martyred when he refuses the homosexual advances of his pagan captain. When this film was released, it was the only English-made film to have required English subtitles, and it is an early film by the noted experimental and outspokenly homosexual director Derek Jarman, who died in 1994. ~ Clarke Fountain, Rovi

Feels like an actual expression of transporting ecstasy, appreciating nudity and the fleshiness of bodies so much that it actually transmutes into a kind of worship.

The story is reduced to a boring and physical apotheosis of sweat, skin, and tedium. [Full Review in Spanish]

A one of a kind film.

Derek Jarman looks at Sebastian and sees what Botticelli (and Perugino, Reni and Mishima) saw, the lambent space between spiritual and sexual longing

The Passion of the Flesh

An out-and-proud Spartacus and a pre-AIDS Beau travail, all in one.

[It] treads an almost imperceptible line between using devout fidelity to ratify its source and using rampant infidelity to undermine it.

I appreciated all of the Latin dialogue, but I could barely get through this. My problem with Jarman is that so much of his stuff comes off as some kind of half-baked art project . . . and the unnecessarily pornographic imagery in this film doesn't help.