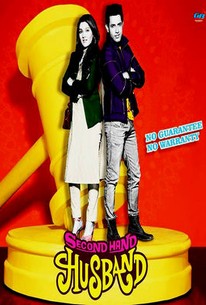 Gurpreet and Rajbir are in love and want to get married. The only hitch holding them back from getting married, is the alimony that Rajbir has to pay every month to his ex-wife, Neha. Gurpreet, being a lawyer, is aware that the alimony needs to be paid only till Neha gets Re-married. Thus, begins the two lovers' journey to find a suitable groom for Rajbir's ex-wife! Their comic journey of groom hunting, goes thru various twists and turns and finally culminates at a point where Rajbir's boss, Ajit Singh gets into trouble with his wife because of his flirtatious ways. Is there a ray of hope for Gurpreet and Rajbir? Can they manipulate their way out of this mess? Forms rest of the storyline of this comedy film.

When I was about to walk into the theatre screening Second Hand Husband, the usher tried to dissuade me... I wish I had listened to him.

The story is as senseless as the name of the film.

Renuka Vyavahare
The Times of India
View All Critic Reviews (3)

There are no featured reviews for Second Hand Husband at this time.