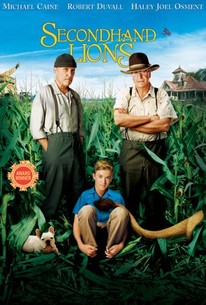 In this family-friendly comedy drama, Walter (Haley Joel Osment) is a shy and bookish boy just short of his teens whose mother impulsively decides to leave him for the summer with his eccentric grand-uncles, Hub (Robert Duvall) and Garth (Michael Caine). Walter isn't especially happy about being left in the middle of Texas with two old men, while Hub and Garth aren't too pleased to be stuck minding a boy, especially one who isn't accustomed to hunting, fishing, or firearms. When Walter starts hearing local gossip about his uncles' wild and wooly pasts, he begins asking a few questions, and while Hub and Garth don't enjoy having the boy poking into their pasts, as they start telling tales of their youthful adventures, they find themselves itching for some new adventures in their lives. Soon Walter is a semi-willing accomplice as his elderly guardians rediscover the wild, impulsive spirit of youth. Secondhand Lions was produced in part by the well-respected visual effects house Digital Domain, who also helped create the imagery for the film's flashback sequences. ~ Mark Deming, Rovi

Adam Ozturk
as The Sheik

Charming family movie for tweens and up.

A wholly unique family film that can moisten your eyes even while it quickens your pulse.

... Michael Caine is badly miscast in this movie. I didn't believe him for one second in that role.

Dvuall and Caine have such easy charm that they make this movie work, though it sags when anyone else is on screen.

A lovingly sweet tale. A positive tale. A tale of kindness and gentility. Does this even exist anymore? In the eyes of Tim McCanlies, it does.

End result: You can't believe any of it. And poor Haley Joel Osment. Now he sees dead movies.

...may wander near and far, mixing down-home hokum with gushy sentiment, yet it generally succeeds in winning us over.

Duval and Caine make the film watchable, but there's too much gunplay for the movie to truly be the child-friendly entertainment that it pretends.

Lions will appeal to a more mature audience because of the solid acting duo of Caine and Duvall. It will also appeal to children because of its almost mythological feel.

The starting looked like it was going to be hella boring but surprisingly, it wasn't. It was one of those movies that gets interesting in every minute. Really good movie. Recommend everyone to watch.

Secondhand Lions tries too hard to appeal to a family friendly crowd, and because of it it loses much of its bite. But when it lets go of its reins it can really turn into something magical.

Although it might strike some viewers as bland, it is actually a beautiful, clever movie with a strong story line.

Better than expected. Haley Joel Osment is a little goofy at times, but some of the moments with Michael Caine and Robert Duvall are pretty funny.