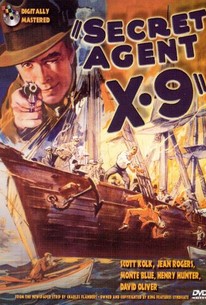 Supporting actor Scott Kolk was elevated to playing the title role in this Graustarkian spy thriller, serialized in 12 chapters by Universal. Reportedly based on characters created by Dashiell Hammett, the serial featured an American secret agent assigned to recover the crown jewels of Belgravia. Agent X-9 is assisted in his quest by Shara Graustark (Jean Rogers) and opposed by a master criminal known as Blackstone (Henry Brandon). A Universal contract player, Scott Kolk had played Leer, one of the young German soldiers-turned-cannon fodder in All Quiet on the Western Front (1930), but stardom had eluded him. A name change to Scott Colton didn't do the trick either, and he left films in 1938. Leading lady Jean Rogers, on the other hand, had played Dale Arden in Flash Gordon (1936) and has become a serial icon. Universal used the title Secret Agent X-9 again in 1945, but with a different setting and plot.

Edward Peil Sr.
as The fence

Eddie Parker
as henchman
View All

There are no critic reviews yet for Secret Agent X-9. Keep checking Rotten Tomatoes for updates!

There are no featured reviews for Secret Agent X-9 at this time.