The Secret Life of Walter Mitty1947 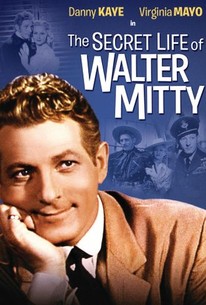 James Thurber wasn't too happy with the Sam Goldwyn film adaptation of his 1939 short story The Secret Life of Walter Mitty, but the Technicolor musical comedy proved to be a cash cow at the box office. Danny Kaye stars as Walter, a milquetoast proofreader for a magazine publishing firm. Walter is constitutionally incapable of standing up for himself, which is why his mother (Fay Bainter) has been able to arrange a frightful marriage between her son and the beautiful but overbearing Gertrude Griswold (Ann Rutherford). As he muses over the lurid covers of the magazines put out by his firm, Walter retreats into his fantasy world, where he is heroic, poised, self-assured, and the master of his fate. Glancing at the cover of a western periodical, Walter fancies himself the two-gun "Perth Amboy Kid"; a war magazine prompts Walter to envision himself as a fearless RAF pilot; and so on. Throughout all his imaginary adventures, a gorgeous mystery woman weaves in an out of the proceedings. Imagine Walter's surprise when his dream girl shows up in the flesh in the person of Rosalind van Horn (Virginia Mayo). The girl is being pursued by a gang of jewel thieves headed by Dr. Hugo Hollingshead (Boris Karloff), a clever psychiatrist who manages to convince Walter that he's simply imagining things again, and that Rosalind never existed. At long last, Walter vows to live his life in the "now" rather than in the recesses of his mind: he rescues Rosalind from the gang's clutches, tells his mother and Gertrude where to get off, and fast-talks his way into a better position with the publishing firm. Substituting the usual Danny Kaye zaniness for James Thurber's whimsy, Secret Life of Walter Mitty works best during the production numbers, especially Kaye's signature tune "Anatole of Paris." ~ Hal Erickson, Rovi

Minerva Urecal
as Woman with Hat

W. Beal Wong
as Headwaiter in Chinese Restaurant
View All

News & Interviews for The Secret Life of Walter Mitty

View All The Secret Life of Walter Mitty News

Critic Reviews for The Secret Life of Walter Mitty

The best parts of the movie Mitty are the ones that hew closer to Thurber, because they put the cartoonish Kaye in a world every bit as nutty.

The blend of fantasy, slapstick, Technicolor spectacle and wild melodrama which results is disjointed and rather monotonous but serves adequately as a showcase for the zany comic antics of star Danny Kaye.

Based on the story by James Thurber, adapters Ken Englund and Everett Freeman attempt to include too much, throwing off the pacing.

Audience Reviews for The Secret Life of Walter Mitty

The original "The Secret Life of Walter Mitty" is not the best executed story of all time, getting a little jumbled in all it's cleverness, but it sure holds your attention and makes you laugh a lot. The actors all bring their A-Game to this picture, and through the normal sequences, to the daydream sequences, it's almost flawless transitioning for it's time. Being made in 1947, this film sure must have been a wonder to it's original audience. There is some very unique filming techniques and the colour tones of everything was decided perfectly. The script for this film is very whimsical and enjoyable to say the very least. When Walter Mitty enters his dream worlds, his character always goes off the rails into a performance that I will remember forever, purely off of it's fun vibe. This is not a perfect film in any way, due to the fact that it can become a little unfocussed as to what it is trying to convey to it's audience, but nevertheless, it's a great film!

Whimsical, telling fable about ordinary life and memorable star vehicle for Danny Kaye, playing the dual role of milquetoast in real life and he-man in his dreams.