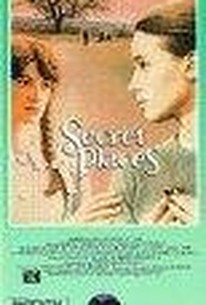 In this film, set in a British girls school just before the outbreak of WW II, two young girls build a beautiful friendship despite their disparate backgrounds. Their teachers disapprove of their close relationship and try to discourage it, which suggests to the viewer that they suspect a lesbian affair could evolve, but as was true to the era being portrayed, this was never verbalized. This film gently touches upon the vulnerable days of adolescence. ~ Rovi

John Blundell
as Soldier on Train

Lesley Nightingale
as Woman on Train

Rosamond Greenwood
as Hannah the Boots

John Henson
as Jack
View All

The film successfully captures from the novel, too, its, sense of the evanescence and caprice of adolescent feelings and friendship.

An excellent drama about female friendship, Secret Places exudes the kind of care and concern that makes intimate dramas so emotionally compelling.

There are no featured reviews for Secret Places at this time.