The Secret Policeman's Other Ball (1982) 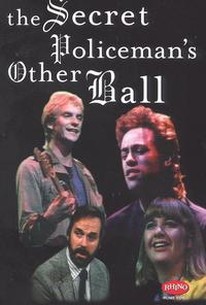 The highlights of two benefit concerts staged in support of Amnesty International are collected in this British performance film, which features ample helpings of both music and comedy. The members of the Monty Python comedy troupe serve as headliners, performing live variations on some of their most famous sketches. Additional humor is provided by such luminaries as Peter Cook, while the musical segments include performances by Pete Townshend, Eric Clapton, and Sting, amongst others. While all of the performers deliver the goods, the film's overall effectiveness is unfortunately limited by the purely functional direction and often poor image quality. ~ Judd Blaise, Rovi

Peter Cook
as Himself

Terry Jones
as Himself
View All

Critic Reviews for The Secret Policeman's Other Ball

The material photographed in The Secret Policeman's Other Ball is sometimes pretty funny, but it tends to get sidetracked by the low-budget videotape recording of the show, and the result is seen through a lens, darkly.

Some of the humor slides over into tastelessness, but most of it is rousing fun in the tradition of the groups from which these performers have sprung.

Technically smoother than its predecessors, this is otherwise the mixture as before: comics and musicians, sometimes in unfamiliar permutations, doing their party pieces on behalf of Amnesty.

Though it looks more like a television special than a conventional movie, The Secret Policeman's Other Ball contains some of the funniest sequences to be found in any first-run movie at the minute.

Combining footage from benefits staged in aid of Amnesty International, this movie is more a souvenir than great cinema.

Worth it for the quiz show sketch with Graham Chapman dressed as a schoolgirl who thinks the answer to every question is "Baghdad!"

Audience Reviews for The Secret Policeman's Other Ball

I think this is the best ever performance of "I don't like Mondays". The musical side of this alone is worth watching it for.

The Secret Policeman's Other Ball Quotes