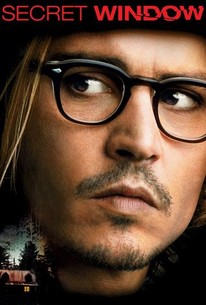 Critics Consensus: Depp is quirkily entertaining, but the movie runs out of steam by the end.

Critics Consensus: Depp is quirkily entertaining, but the movie runs out of steam by the end.

Critic Consensus: Depp is quirkily entertaining, but the movie runs out of steam by the end.

From writer/director David Koepp (Stir of Echoes) comes this filmed adaptation of Stephen King's novella Secret Window, Secret Garden, one of four stories in the collection Four Past Midnight. Johnny Depp stars as Mort Rainey, a recently divorced author who decides to take some time off at his cottage. Unfortunately for Rainey, John Shooter (John Turturro), an unbalanced wannabe writer, tracks him down, claiming that Rainey plagiarized his work. Also starring Maria Bello, Charles S. Dutton, and Timothy Hutton, Secret Window is the second story from Four Past Midnight to be adapted as a film, the first being 1995's made-for-television The Langoliers. ~ Matthew Tobey, Rovi

Actually, there isn't much of a movie here at all. But there is always Depp... By far the director David Koepp's best decision was to indulge in a riveted idolatry of his star.

It all feels recycled and re-recycled.

Anyone with a passing knowledge of King's jam-packed oeuvre and its spotty movie translations will be fidgeting in their seats from the get-go.

Even Johnny Depp in quirk-overdrive can't save it, his slyly insincere performance eventually irritating as much as the sincerely stupid movie he's stuck in.

Mr. Depp demonstrates once again that he never disappoints as an actor, even in something as fraudulent as Secret Window.

Johnny Depp is the saving grace of a sub-par, often boring mystery film with a spirited performance.

Once again, Depp slouches into a piece of mainstream entertainment and takes every opportunity to amuse himself.

This is, in short, a mystery story that has very little actual mystery.

It's a telling sign when a supposedly sympathetic character's head is smashed on a rock and laughter erupts in the theatre.

...an enjoyable little genre picture -- tense and stylish and full of Johnny Depp.

Based on a short story of Stephen King's, this is a mind twister of a film with the kind of performance that Johnny Depp can pull off. Watching this now, it does seem much more predictable than when it was released, perhaps because a lot of similar themed films have been made since, easy watching though! My favourite role of John Turturro's.

Based on a novella by Stephen King, this is a fun little story about a writer (big surprise) named Mort Rainey who, while trying to work at his secluded lakeside cabin, is menaced by a mysterious stranger named John Shooter who claims that Mort palgiarized his work, and has no problems with resorting to psychotic behavior in order to see that he gets justice. You may or may not have guessed this, but this film has a twist ending. And while the twist isn't bad, I think the film could have been far more interesting had there been no twist. For that to work though, other parts of the story would have to be rewritten and that sort of thing, but what I'm getting at is that, while the film isn't that bad, it's not really all that great either, and it doesn't really hold up to much scrutiny or repeat viewings. As a single watch though, it's passable. I enjoyed seeing the stakes get raised between Mort and John, and the film does have a good sense of mood, tone, and atmosphere, and a pretty decent pace. It just gets to me because many films that contain twists are usually full of holes, and I get the feeling that the novella probably doesn't have these sort of problems, mostly because of the medium and whatnot. All in all though, I give this film a lot of credit because, even though the story is nothing fresh and it isn't infallible, it is quite fun, watchble, and entertaining. Philip Glass provides a pretty nice score, and Koepp seems to be having fun as the helmer. Plus, there's a good cast here, even though it would be better seeing them here with some stronger material. Still though, Depp is good as this sort of thing, and his character is rather likeable (mostly), and Turturro, though maybe phoning it in, is also good at this sort of thing as well. I just wish that Dutton had more screentime and stuff to do, and that more could have been done with Hutton and Bello. What time these three do have is okay, but Hutton probably has the shortest end of the stick (they probably could have gotten a lesser known and it would have been better). Hutton isn't bad, but he feels unnecessary. Honestly, I should dock this one a half star, but I can't really bring myself to do it because the good outweigh the bad.

Johnny Depp's portrayal of Mort Rainey and his descent into madness is outstanding. It's almost enough to climb out of the plot holes. In fact, he so good in his role, you could almost get confused and think this was a good movie. It isn't. The story is paper thin and despite it's best efforts, it's actually quite predictable. Worth checking out for Depp's performance, otherwise avoid.