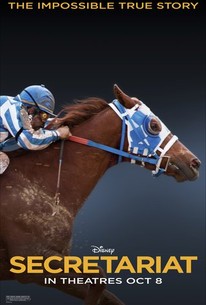 Critics Consensus: Rousing, heartwarming, and squarely traditional, Secretariat offers exactly what you'd expect from an inspirational Disney drama -- no more, and no less.

Critics Consensus: Rousing, heartwarming, and squarely traditional, Secretariat offers exactly what you'd expect from an inspirational Disney drama -- no more, and no less.

Critic Consensus: Rousing, heartwarming, and squarely traditional, Secretariat offers exactly what you'd expect from an inspirational Disney drama -- no more, and no less.

Based on the Novel "Secretariat: The Making of a Champion" By William Nack, Secretariat chronicles the spectacular journey of the 1973 Triple Crown winner. Housewife and mother Penny Chenery (Diane Lane) agrees to take over her ailing father's Virginia-based Meadow Stables, despite her lack of horse-racing knowledge. Against all odds, Chenery-with the help of veteran trainer Lucien Laurin (John Malkovich)-manages to navigate the male-dominated business, ultimately fostering the first Triple Crown winner in 25 years and what may be the greatest racehorse of all time.-- (C) Disney

I'm sick of the simpering American morons who lap up this rubbish.

Just when we thought John Malkovich didn't have another semi-intentionally deranged performance left in him, he has come storming back with another uproarious turn...

Despite a decent performance from Lane as the homespun trainer, Secretariat is more blind alley than Blind Side.

This tale of wealth, horse-breeding and good old Christian faith is just about as hammy as a study of commodified horse sex can be.

This horsey, 1970s-set Disney film doesn't boast the most imaginative script and is too long and businesslike for youngsters -- yet it still produces a lump in the throat.

Watching Secretariat is an experience as antithetical to watching an actual horse race as it gets.

If you love horse movies, then you'll probably love Disney's newest, much-hyped Secretariat, which fits firmly in the genre of other recent triumphant equine epics.

Secretariat works fine as a film but if you want the real truth behind the narrative, you're better off reading Bill Nack's book.

Secretariat had a highly charismatic, unique, and amusing personality, similar in many ways to one of his human contemporaries--Muhammad Ali. Both of them were the greatest of all time, and both of them knew it. Loads of fun.

Right at home among the upper echelon of Disney's feel good, inspirational films.

By the time the race occurs, the incredible back-story has unfolded and you may just have to contain yourself from wanting to stand up and begin cheering.

Secretariat is a well crafted family film in the vein of Seabiscuit. With a great cast headed by Diane Lane and John Malkovich, Secretariat is an entertaining picture directed by Randall Wallace who previously directed We Were Soldiers, The Man in the Iron Mask and wrote the script to Braveheart. This is quite a different project for him to take on, but he crafts a great film here yet again, and Wallace is a fine director who is able to tell a great story. The cast here are great, and each brings something memorable to the screen. I personally preferred this film over Seabiscuit, and it is a highly engaging film from start to finish. If you love these films, then definitely give this one a shot. The racing scenes are well done and quite thrilling and are of course the highlight of the film. Horse themed movies tend to be bland nowadays and not too interesting, but this one has heart and charm, and is based by an incredible true story that is just worth seeing due to the fact that odds were against Secretariat to win the Triple Crown, and he astounded everyone and became the most famous racehorse who won the crown and became an icon of the sport. Although it is marred by predictability, this is worth seeing due to a strong cast, a great story and great direction. This is a must see for anyone looking for a great drama to watch, and although it follows the same formula as the traditional "horse race movies", it is also a bit different as well. Secretariat was unique, and this film is a fine tribute to that racing career. If you enjoyed Seabiscuit, then you'll most likely enjoy this one too.

True story about the best race horse who won the triple crown due to the determination of its owner, trainer and jockey. Great cast. If you like Seabiscuit you will like this movie.

An Extremely well produced film - glossy, shiny and well paced, this Disney production manages to get past some heavy handed Disneyesque sentimentality and deliver the goods in a ripping yarn about the greatest racehorse to ever run a race, and the woman who believed in him. Diane Lane is near oscar worthy in her presentation of Penny Chenery, mother of four, and a housewife to an attorney. They reside in Colorado, and as the story begins, Penny has to rush back to the familial homestead in Virginia upon the death of her mother. When she arrives she finds the farm in decline and disrepair due mainly from her father being in the throes of Altzheimers. Fortunately, in a lucid moment, Dad bred two of his mares to a famous stallion (Bold Ruler). The story is not only of how Penny saves the farm, risking quite a lot (including the ire of her brother for not selling), but her belief in the horse she calls Big Red. There's plenty scenes of bonding and horse sense, letting you know how noble these beasts are, and how smart and intuitive Big Red is. This is a bit over the top, as is the perhaps too constant reminders of a woman standing up to the status quo in what was at the time a man's sport and a man's world. Regardless, it makes for a good story, playing up the "us against them" aspect as well as the perhaps silent bond between horse and those closest to it. In fact, by showing us some "human" aspects of the legendary horse - his love for the limelight, etc. - the film draws you in and makes you seriously root for Secretariat. There's plenty of drama in the well shot racing scenes and, even if you know the ending of the races, somehow there's still drama and you're on the edge of your seat yelling "go Big Red". Perhaps it's because I'm old enough to remember those races and being totally in awe of what has to be the greatest performance by a horse ever (the Belmont Stakes). I still get chills recalling the Sport's Illustrated cover of that magnificent, sturdy beast pounding the track into submission with the simple title "super". But the film is not just about those iconic races and all the drama surrounding them. There's the human tale of how Penny chose her trainer and jockey. In yet another quirky, yet oddly effective performance, John Malkovich shines as the French Canadian trainer, frequently muttering in French. Then there is the joy of seeing the always wonderful Margo Martindale - just so natural in every role she plays. I found it interesting to see both Margo and ex congressman Fred Thompson in the same film; recalling the wonderful romance they portrayed over several episodes of the Sidney Lumet TV show 100 Centre St which aired several years ago. Both actors so fully able to just "be". There's a wonderfully filmed sequence that aptly sums up the allure of this film. As the Belmont is being run and fans and critics alike utter that there's no way any horse can sustain such a torrid pace, the film backs off and shows the empty far turn with the white shiny rail on the right hand side. A voice over narration repeats a bit of poetry from the film's beginning; talking about how a warrior will always answer the call of the bugle - and then here comes Big Red around the turn, all by himself, thundering down the straight away and into history.