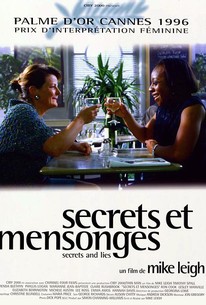 Critics Consensus: Secrets & Lies delves into social issues with delicate aplomb and across-the-board incredible acting, and stands as one of writer-director Mike Leigh's most powerful works.

Critics Consensus: Secrets & Lies delves into social issues with delicate aplomb and across-the-board incredible acting, and stands as one of writer-director Mike Leigh's most powerful works.

Critic Consensus: Secrets & Lies delves into social issues with delicate aplomb and across-the-board incredible acting, and stands as one of writer-director Mike Leigh's most powerful works.

It is an irony of family life that much of its fabric is held together with the tenuous stitches of every day lies. When suddenly revealed, such small seemingly innocent deceits can cause tears that are difficult to repair. As with other Mike Leigh films, this drama offer a darkly serio-comic look into the dysfunctional lives of average people. Following her adoptive mother's death, Hortense, a successful, black London optometrist, visits a social worker in hopes of finding her biological mother. White single mother Cynthia lives in a decaying part of town. She and her daughter Roxanne have a love-hate relationship and constantly argue. Cynthia's younger brother Maurice, a successful photographer, lives on a better side of town. He is married to the obsessive-compulsive, emotionally distant but abusive Monica. One day, Maurice pays a long overdue visit to Cynthia and offers to host Roxanne's 21st birthday party at his home. Soon afterward Hortense shows up claiming that Cynthia is her birth mother. Cynthia is terrified to see this sudden reminder of her past and matters are not helped when Hortense says exactly the wrong thing at the wrong time. Despite their initial difficulty, the two women's curiosity overcomes their fears and they decide to meet at an empty tearoom. There they become friends and come to a sort of peace, one that threatens the entire family when Cynthia invites Hortense to Roxanne's party. Mike Leigh's first film in since 1993, Secrets and Lies was nominated for several Oscars and earned the Golden Palm award at Cannes in 1996.

Emma Amos
as Girl with Scar

Keeley Flanders
as Girl in Optician's

Stephen Churchett
as Man in Suit

David Neilson
as Man in Suit

Peter Stockbridge
as Man in Suit

Peter Waddington
as Man in Suit

Philip Davis
as Man in Suit

Mia Soteriou
as Fiance
View All

Secrets and Lies is a beautifully constructed sentimental melodrama, with none of the rough edges that Mike Leigh has insisted on in the past.

Secrets & Lies is littered with scenes that begin at a fever pitch before descending into a becalmed, meditative state.

Leigh's best work yet is indisputably screen art, but it's a flesh-and-blood 'people' movie, too.

It moves us on a human level, it keeps us guessing during scenes as unpredictable as life, and it shows us how ordinary people have a chance of somehow coping with their problems, which are rather ordinary, too.

Much of Secrets & Lies unfolds as if we're peeking around corners, watching Mike Leigh's characters struggle with personal, yet hidden, pain. Everyone in the film is hurting but unwilling to reach out to others in the family.

a masterful dramedy about that wonderfully, terribly complex thing we call family

Secrets & Lies is a mesmerizing film, with the emotional stakes raised so high that each confrontation or revelation generates as much (or more) genuine suspense as anything found in Hollywood's latest thriller-of-the-week.

There may not be a whole lot of plot to it, but what's there is emotionally engaging, and performed by a remarkable ensemble.

In the hands of another director, it would have been a sentimental melodrama, a soap opera, but with nuanced writing and sharp helming, Mike Leigh mixes humor and pathos in equal measure.

Much more than just a touching story of the ties that bind humanity and the way we reveal ourselves, "Secrets and Lies" (1996) is a staggering work of cinematic genius. It is truly a perfect film.

It's hard to argue against it being a sharply observant and deeply felt melodrama, one that is accessible, contemporary and frightingly realistic.

Mike Leigh's steady direction is really impressive, and he creates a largely improvised family drama that surprises us with many nuances and for being so engaging, relying especially on two outstanding Oscar-nominated performances by Brenda Blethyn and Marianne Jean-Baptiste.

What do you do when the baby you put up for adoption 25 years ago suddenly calls you out of the blue and wants to meet -- especially if you are not all that happy with your life at the moment. This movie takes us through that. What I found amazing is that I read that most of the lines were improv. The actors were given their roles, but no actual script.

It's been quite a while since something provoked me tears and laughter at the same time. A film with incredible humanity. Zany, tender and quite funny.