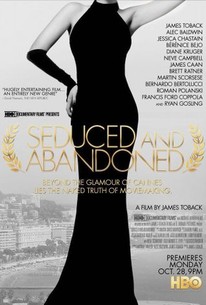 Critics Consensus: Although Seduced and Abandoned highlights the frustrating side of the movie business, Alec Baldwin and James Toback's comedic chemistry ensures that its darker moments are leavened with a lighter touch.

Critics Consensus: Although Seduced and Abandoned highlights the frustrating side of the movie business, Alec Baldwin and James Toback's comedic chemistry ensures that its darker moments are leavened with a lighter touch.

Critic Consensus: Although Seduced and Abandoned highlights the frustrating side of the movie business, Alec Baldwin and James Toback's comedic chemistry ensures that its darker moments are leavened with a lighter touch.

Actor Alec Baldwin and filmmaker James Toback explore the culture of cinema by canvassing the 2012 Cannes Film Festival for financial backing for their update of "Last Tango in Paris" set in Iraq in the 21st century, pitching their idea to industry big shots such as Mark Damon and Avi Lerner, and interviewing Martin Scorsese, Francis Ford Coppola and others about their love of film. ~ Perry Seibert, Rovi

Critic Reviews for Seduced And Abandoned

The film is funny, and sad, and insightful if you've no idea what a movie deal looks like, which I hadn't.

Seduced and Abandoned is, if nothing else, a film buff's delight.

Their [Toback and Baldwin] film about the idea of the film is entertaining and diverting, even if there is also something slightly melancholy about this artificial pursuit of a cinematic phantasm.

Even the overarching quasi-comic format is old hat, having been done far better by Morgan Spurlock in The Greatest Movie Ever Sold.

Nice try, guys, but no deal.

Hugely self-indulgent and at times just plainly ridiculous, the most eye-opening aspect of Seduced and Abandoned is the very level of talent wrangled into contributing.

Seduced and Abandoned isn't a deeply intellectual film, but it is a wry and dry road trip that's worth a watch, at least for the pleasure of Baldwin playing the role he was born to play, Alec Baldwin.

The film is at its very best when Baldwin informally cross-examines respected names such as Martin Scorsese, Roman Polanski, Bernardo Bertolucci, James Caan and Jessica Chastain.

It's funny stuff, yet the real nuggets here are when [Alec] Baldwin defaults to standard doco-mode and asks an impressive range of people...about the harsh realities of working in the world's most expensive entertainment artform.

An amusing and, at times, genuinely revealing doco - albeit one with distinctively niche appeal, and cloaked in an air of unmistakable self-satisfaction.

As a film trade journalist in the 80s and 90s I covered the Cannes film festival 20 times, and seduced and abandoned is how I always felt...It's like three different docos slapped together, none of them complete and coherent - or satisfying

Audience Reviews for Seduced And Abandoned

There are no featured audience reviews yet. Click the link below to see what others say about Seduced And Abandoned!