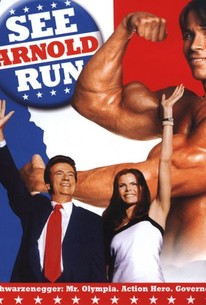 This made-for-cable biopic recounts the incredible career of Arnold Schwarzenegger, who after a hardscrabble childhood in Austria came to America in the pursuit of the three goals: to be a champion bodybuilder, a popular film actor, and a mover and shaker in the world of politics. It goes without saying that he succeeds in all three endeavors -- spectacularly so -- and, as a bonus, enjoys a happy and enduring marriage to Maria Shriver, one of the many well-publicized offshoots of the influential Kennedy family (who, ironically, are Schwarzenegger's political polar opposites). The film parallels Schwarzenegger's dizzying campaign for the governor's office in California with his strenuous efforts to be chosen as "Mr. Olympia" some three decades earlier. Jürgen Prochnow stars as the Arnold Schwarzenegger of 2003, Roland Kickinger is seen as the younger Schwarzenegger, and Mariel Hemingway is cast as Maria Shriver. While the film doesn't really take sides, it is entertaining and good-humored enough to please both fans and detractors of Schwarzenegger alike. Based on the book by Nigel Andrews, See Arnold Run ran on the A&E Network on January 30, 2005.

Entertaining only in an "OMG is this stupid" sort of way, this is a flimsy little biopic that tells us nothing new about a guy who has had more than enough press by now.

What would you expect from a telepic written by the guy who gave us Category 6: Day of Destruction, starring the guy from Son of the Beach?

The casting is either inspired or excruciating or both

There are no featured audience reviews yet. Click the link below to see what others say about See Arnold Run!