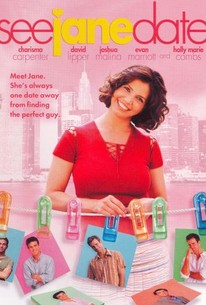 Based on a novel by Melissa Senate, this made-for-cable romantic comedy stars Charisma Carpenter as Jane Grant, a New York bachelorette with a moderately successful job at a publishing company. At the behest of her Aunt Ina (Linda Dano), Jane must find a suitable date to escort her to her cousin's wedding in four weeks. Our heroine experiences a number of romantic misadventures with a steady parade of "Mr. Wrongs" (one of whom is played by Joe Millionaire's Evan Marriott) before hitting upon a man who might be "the One" -- and then again, might not. Making Jane's task all the more difficult is the presence of her former high school nemesis Natasha Nutley (Holly Marie Combs), now a soap opera diva whose autobiography Jane has been assigned to edit. See Jane Date debuted August 16, 2003, on the ABC Family Channel.

It's not that Hallmark movies are bad per se; they're just utterly inoffensive. Every character fits a dependable type, and no risks are taken. Jane's smug younger cousin is getting married, so Jane lies about a perfect boyfriend and must audition a parade of dubious candidates before she finds the inner strength to attend the wedding solo. It's nice to see Charisma Carpenter again and also David Lipper who played Viper on "Full House"!