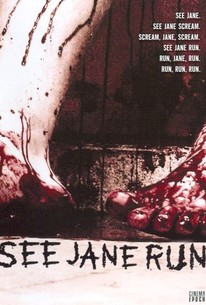 /Horror fans who like their scares delivered raw are certain to flinch at this brutal shocker about four teenage travelers who make the fateful mistake of picking up a hitchhiker. Later, the stakes of survival are raised after the doom vacationers take a terrifying wrong turn.

There are no critic reviews yet for See Jane Run. Keep checking Rotten Tomatoes for updates!

There are no featured reviews for See Jane Run at this time.