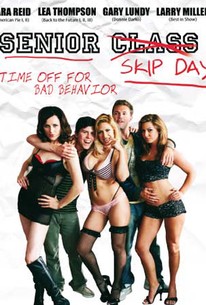 Larry Miller, Tara Reid, and Lea Thompson star in this rowdy party film about a high school senior who hatches a plan to throw the ultimate skip-day bash. Adam is determined to end his high school career with a bang, and what better way to do that than to throw a party in Principal Dickwalder's home? Principal Dickwalder is a strict disciplinarian, and when he overhears Adam and his friend discussing the details of their plan he comes down on them all with an iron fist. Now Adam's only hope for redemption is to throw the party himself, but Principal Dickwalder isn't about to let that happen either. Who will come out on top in this fierce battle of wills, the student with a terminal case of senioritis or the principal who forgot what it means to be a fun-loving teen?

Ted Lange
as Reverend
View All

Nothing really works for this thrown-together, straight-to-DVD film.