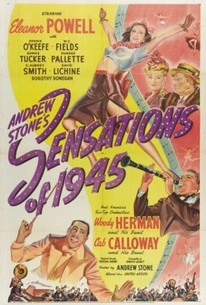 Originally titled simply Sensations, this musical comedy was the final starring film for dancer Eleanor Powell and the final film, period, for comedian W.C. Fields. Powell is the prize client of flamboyant press agent Eugene Pallette. Dennis O'Keefe, Pallette's stiff-necked son, disapproves of his dad's razzle-dazzle promotional techniques, but finds himself just as shameless as his father when he takes over the business. Powell's particular highlight is a dance staged in a huge pinball machine (yes, critics in 1945 did say "Tilt!") W.C. Fields' contribution, based on one of his old Ziegfeld Follies sketches, is astonishingly unfunny; this protracted shaggy-dog story about a man who refuses to vacate his train compartment comes to life only during the byplay between a visibly ailing Fields and his sprightly female companion Louise Currie. Other guest stars in Sensations include Sophie Tucker, Cab Calloway, Woody Herman and a pre-Mary Ford Les Paul. ~ Hal Erickson, Rovi

W.C. Fields
as Himself

Sophie Tucker
as Herself

Hubert Castle
as The Great Gustafson

Dorothy Donegan
as Herself

David Lichine
as Himself

Wendell Niles
as Himself

Gene Rodgers
as Himself

Mel Hall
as Himself

Willie Pratt
as Himself

Woody Herman & His Orchestra
as Themselves

Critic Reviews for Sensations of 1945

There are no critic reviews yet for Sensations of 1945. Keep checking Rotten Tomatoes for updates!

There are no featured reviews for Sensations of 1945 at this time.