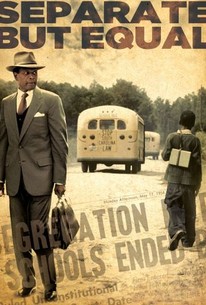 Based on the ground-breaking Brown vs. the Board of Education case, the made-for-television Separate But Equal follows a young Thurgood Marshall (Sidney Poitier) as a lawyer who argues the racially-charged lawsuit before the Supreme Court. When the black students of Clarendon County, South Carolina are denied their request for a single schoolbus, a bitter and courages battle for justice and equality begins. The NAACP lawyer's desparate fight for the civil rights that didn't come with the outlaw of slavery nearly a century ago becomes an all-encompassing struggle both in his personal life as well as the courtroom. Marshall's opponent is John W. Davis (Burt Lancaster) and the two argue passionately and eloquently before a Supreme Court led by Chief Justice Earl Warren {($Richard Kiley)}. Separate But Equal is a moving and human dramatization of one of the most pivotal court cases in American history. ~ Tracie Cooper, Rovi

Critic Reviews for Separate But Equal

A Hollywood big screen version would have cut out too many details, so the miniseries format is ideal in letting this piece of history unfold.

Traces the events leading up to the landmark 1954 Supreme Court decision in Brown v. Board of Education

There are no featured reviews for Separate But Equal at this time.