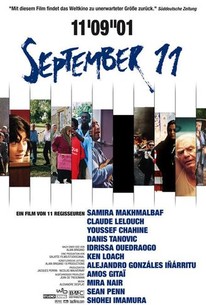 In the aftermath of the tragedies on September 11, 2001, the French film company Studio Canal called upon a group of filmmakers, representing various regions of the world, to address the scope of the situation in however broad or intimate a context as they saw fit. The one guideline they were given was that no one film could exceed 11 minutes, nine seconds, and one frame. The resulting omnibus film, 11'09"01, showed at festivals around the world the following year and garnered a theatrical release in 2003. Each filmmaker's entry takes a different approach: French director Claude Lelouch tells the tale of a World Trade Center tour guide who is on the verge of a breakup with his deaf girlfriend when the terrorist attacks hit; similarly, Hollywood actor-director Sean Penn chronicles the lonely existence of an old man living not far from the Twin Towers. Egyptian director Youssef Chahine and British social realist filmmaker Ken Loach created the most controversy with their entries, which, respectively, address the points-of-view of a suicide bomber and of a Chilean who recalls the brutal coup funded by the United States in his country on September 11, 1973. Alejandro González Iñárritu's piece is the most abstract, taking images from television on the day of the attacks and cutting them with selected bursts of sound. Samira Makhmalbaf, Danis Tanovic, and Idrissa Ouedraogo all tell small-scale stories of the effects of the attacks on tiny villages in Iran, Serbia, and Burkina Faso, respectively.

Unified only by its depressing timidity and a surprising lack of relevance, 11'09"01 is a failure.

Ken Loach's entry aside, this is a self-indulgent bid to wring arthouse kudos from tragedy.

An ungainly, intermittently harrowing omnibus filled with moments of piercing sorrow and rage.

You'll get a provocative picture of how a variety of filmmakers reacted to the events of Sept. 11.

An uneven but telling document.

The results are not monumental, but they are a variety of sober responses to the tragedy that help place the event in a global context.

The film presumably suggests that September 11 was a horrifying event which opened people's eyes to various harsh realities.

The most forceful contribution is by Ken Loach.

Seeing September 11 now, five years after its completion, is a reminder not only of the visceral terror from that day, but also of the sense of shared global humanity that flourished briefly in its wake.

Eminently worth seeing, arguing with, and thinking about.

the best segments are from the most obscure directors... the big guns mostly strike out

Some were reported to have expressed very un-American sentiments, but that wasn't the case at all.

Gonzalez's short is stunning. It is the best part of this collection which has a generally high standard. Well worth investing in

A unique view on an historical tragedy. Of particular note is Sean Penn's short - very brilliant.