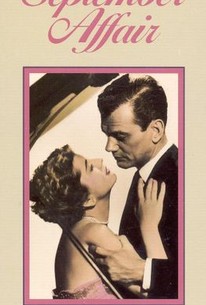 With location scenes lensed in Italy, September Affair is consistently good to look at, even when the pacing flags and the dialogue becomes too verbose. Joan Fontaine and Joseph Cotten star as married couple Manina and David. Trouble is, they're not married to each other. Through a series of misunderstandings, Manina and David are listed among the victims of a plane crash. Since the world at large considers them dead, the couple decides to start a whole new life together. Eventually, however, the guilt they share regarding their respective spouses overrides their passions. September Affair is remembered today as the film that catapulted a 12-year-old record -- Walter Huston's rendition of "September Song" -- to the top of the 1950 hit parade.

September Affair is polished in all departments, including music, back grounds and acting.

Well acted soap opera, what really puts this over is the incredibly beautiful score.