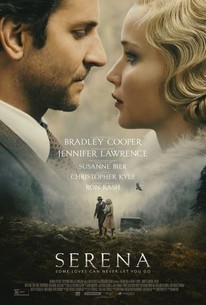 Critics Consensus: Serena unites an impressive array of talent on either side of the cameras -- then leaves viewers to wonder how it all went so wrong.

Critics Consensus: Serena unites an impressive array of talent on either side of the cameras -- then leaves viewers to wonder how it all went so wrong.

Critic Consensus: Serena unites an impressive array of talent on either side of the cameras -- then leaves viewers to wonder how it all went so wrong.

The North Carolina mountains at the end of the 1920s - George and Serena Pemberton, love-struck newly-weds, begin to build a timber empire. Serena soon proves herself to be equal to any man: overseeing loggers, hunting rattle-snakes, even saving a man's life in the wilderness. With power and influence now in their hands, the Pembertons refuse to let anyone stand in the way of their inflated love and ambitions. However, once Serena discovers George's hidden past and faces an unchangeable fate of her own, the Pemberton's passionate marriage begins to unravel leading toward a dramatic reckoning. (C) Magnolia

Christian McKay
as Banker in Boston

Jim High
as Woodcutter
View All

It's an odd misfire from two actors at the peak of their game, but a misfire nonetheless.

Considering how well Cooper and Lawrence meshed in Silver Linings Playbook, Serena's inert central dynamic underlines the fact that chemistry is as much a byproduct of directorial stewardship as it is of actors' natural chemistry.

Absolutely nothing works. No one seems to understand the place or the people. And the only thing gleaned from the lumber industry is that you can build an entire movie from performances made of wood.

In other words, a lot of people realized they had an epic clunker on their hands.

Given these unpromising circumstances, I was expecting something truly awful, and perhaps that might have been more fun to watch than this lugubrious period piece. The production values and the costumes are the true stars.

A flat-out disaster, the kind of film that its cast and crew hope gets buried as quickly as possible as they race to move on to other projects.

Attempts but does not succeed.

In the big picture Serena isn't an all out disaster, but because of the above-the-title talent involved it is a major disappointment.

Serena packs in as many shock-jolt moments as the average horror movie, though these have above average impact.

Director Susanne Bier's fans will be especially disappointed by the story's lack of focus and abrupt character development, flaws absent in her far superior films like After The Wedding, and In A Better World.

To describe this movie as unwatchable is generous. Neither Cooper nor Lawrence seem at ease with the painfully stilted and shapeless characters they portray.

The plot is predictable and doesn't really come together as a whole, but the film has a handsome production design, a beautiful cinematography that explores to its best extent the beauty of its locations and two very intense performances by Lawrence and Cooper to make it worth it.

Bradley Cooper and Jennifer Lawrence star in the dramatic period film Serena. Set in the 1930s, a businessman and his young bride work together to run a struggling North Carolina logging company. Cooper and Lawrence both give strong performances and have good chemistry together. And the production values are especially good; particularly the score, which does a great job at setting mood and atmosphere. But the plot is pretty thin, and takes a rather dark turn at the end. Yet despite a few weaknesses, Serena is an intriguing character drama.

Disappointing. The first half of this film was actually pretty good, but the last maybe 40 minutes or so really drops off in quality. The one good thing I can say about this film is that Bradley Cooper and Jennifer Lawrence are great here, but that's to be expected.

"Serena" is a capsule to expose these actors even more than they should be, as both of them do not belong together in this film. After "Silver Linings Playbook," Bradley Cooper and Jennifer Lawrence have been getting typecast, and that is the worst thing to happen to an actor in my opinion. The best way to describe this film is a remake of "Romeo and Juliet" in all of the worst ways possible. Every bit of romantic dialogue shared between them felt forced, as every shocked moment made me roll my eyes rather than be surprised. I felt like someone has taken the script of "Romeo and Juliet" and altered aspects to fit this time period, because many beats are duplicated here. "Serena" is finely shot, but aside from that, every other aspect, from storytelling to to filmmaking, was extremely formulaic. Now that is not always a bad thing, because with formulaic filmmaking, a great film can be made out of a well-written script. That is not the case here, so in the end, "Serena" falls flat in almost every regard. Even though I enjoyed viewing this cast, the film around them just continued to fall apart. Recommendable? Not in the least.