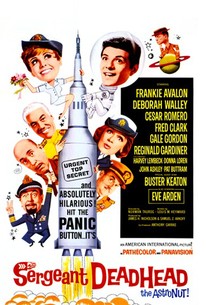 In this comedy, a hapless Army sergeant's plans to marry are temporarily delayed after he accidentally ends up launched into space with a chimpanzee. Upon his return, he is a changed man and is ultimately sent to prison after he threatens to go public with the mix-up. Meanwhile, suave Sgt. Donovan, Deadhead's double, takes his place at the altar. To stop him, Deadhead breaks out of prison and becomes his old self again just as he arrives at the honeymoon suite. Naturally he wins his rightful bride and happiness ensues.

Pat Buttram
as The President

There are no critic reviews yet for Sergeant Deadhead. Keep checking Rotten Tomatoes for updates!

Cute silliness with a veteran cast. If you don't go in expecting Shakespeare or weighty topics this is a pleasant diversion.