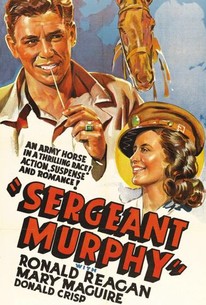 In this wartime drama, cavalry private Dennis Murphy purchases a nervous horse, Sergeant, after it is deemed unfit for military service. With patience and love, Murphy trains his horse into a champion and later proves his worth by sneaking the steed into England where he enters him in the Grand National. He wins. The plucky private also wins the affection of the colonel's daughter. This film is based on a true story.

William B. Davidson
as Maj. Gruff

There are no critic reviews yet for Sergeant Murphy. Keep checking Rotten Tomatoes for updates!

There are no featured reviews for Sergeant Murphy at this time.