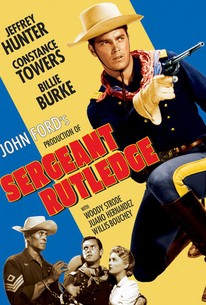 John Ford directed this distinguished movie, the first mainstream western to feature an African-American hero. The tale opens as 9th-Cavalry Sergeant Rutledge is tried for raping his commanding officer's daughter and then killing the CO. His tale is then told in flashback. The story is an interesting examination of subtle racism and it is also a tribute to the courageous black men who rode in the 9th Cavalry.

Mario Arteaga
as Mexican
View All

All in all, Ford has once more turned in a gripping, adult Western with a fine modern twist.

Sergeant Rutledge probably is the best film ever made by Hollywood dealing with a Negro personality in the key role and dealing with what are the ugliest aspects of crime across the color line.

Woody Strode should be nominated for an award for his sensitive portrayal of Sgt. Rutledge.

The once-great director John Ford resumes his love affair with the bygone U. S. Cavalry in this long and corny court-martial drama.

Noted as the first major Hollywood western to feature an African-American hero.

An astonishing film not only for its sheer visual and narrative excellence but also for its early acknowledgement of race relations in America.

There are no featured audience reviews yet. Click the link below to see what others say about Sergeant Rutledge!