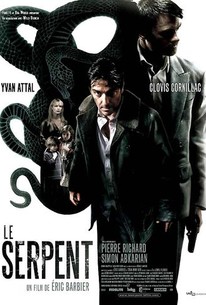 Gallic writer-director Eric Barbier borrows Hitchcock's old premise of an innocent unjustly accused of lurid and brutal actions - with all evidence pointing inconveniently to him - for the Parisian-set thriller Le Serpent. Yvan Attal stars as Mandel, a slightly introverted photographer careening toward an ugly divorce from his affluent German wife. Back into his life waltzes Plender (Clovis Cornillac), a psychopath obsessed with obtaining vengeance on Mandel for a long-ago trauma that he believes the photographer caused during childhood. The revenge takes the form of a model who falsely accuses Mandel of rape and then turns up dead in the photographer's car - making him the number one suspect. At the same time, Plender begins to inveigle himself into the confidences of Mandel's unsuspecting family. Barbier also authored the screenplay, adapting a novel by Ted Lewis (Get Carter). ~ Nathan Southern, Rovi

The story came from Get Carter's source author, English crime writer Ted Lewis, but the venomous sophistication and serpentine inner logic are French.

Taut, stylish French thriller, based on a novel by Ted Lewis.

It's slick, efficient, tough-nosed film-making, enmeshing our hapless hero more and more tightly in its narrative coils. Only a matter of time, surely, before Michael Douglas shows up in the remake.

The Serpent makes atmospheric use of its urban locations. But the more overblown the film becomes the less it engages our emotions.

An occasionally effective and stylish piece of filmmaking, capturing both the gloss and grime of the best thrillers, and delivering the odd shock as well.

Disappointing French thriller, thanks to a ridiculous plot, overblown direction and some dodgy acting from Clovis Cornillac.

A penchant for silliness and a tabloid-ready storyline mean The Serpent is a decent thriller that loses some of its impact as it unfolds, but remains a well-paced and enjoyable film.

A mite overblown, but no less enjoyable for it - and guaranteed to get a Hollywood re-jig.

You will be thrilled all the way through Le Serpent, and once the final credits roll, you will be awed by the muscular solidity of its construction.

Director Eric Barbier's thriller is an ambitious affair, full of writhing storylines, switchback narrative and a terrifically vile villain in the form of Clovis Cornillac.

Not unwatchable, but a distinct let-down, since this crew surely had a more incisive movie in them.

Almost brilliant in every way. This is a very well written storyline of conspiracy, framing, revenge, brought to life by two brilliant performances by Yvan Attal and Clovis Cornillac, the chemistry of which between the two was totally fascinating. I am surprised that there hasn't been a Hollywood remake of this, not that it could be bettered, but it's the usual type of film that would be remade by Hollywood. The best Thriller I've seen in a while.

French thriller that just don't get better than this.Murder,blackmail,bad guy and an innocent man.All sum up to what your going to get for 2 hrs.Very enjoyable and truly gripping from start to finish.