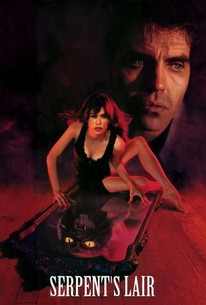 An ornery alley cat sets in motion a chilling series of supernatural events in this horror film. The terror begins as a newlywed couple moves into a gloomy old Los Angeles apartment. They are not there long before the ominous kitty shows up. For some reason she utterly despises the bride, Alex, and slyly manages to trip her on the stairs, effectively sending Alex to the hospital and leaving her husband Tom alone in the apartment. Once the wife is safely away, a strange seductive woman, Lillith, visits Tom, telling him that she has come to gather up the remaining belongings of the former tenant, her recently deceased brother. Lillith has a peculiar feline grace as she slinks into the apartment and accepts Tom's offer for a cup of coffee to which she adds a prodigious amount of milk. Soon, she successfully seduces poor Tom and nearly wears him out with her violent, insatiable demands for continuous sex. Eventually, Tom becomes so exhausted that he begins having terrifying Satanic hallucinations and finds himself facing the Devil himself. Fortunately, he has his mother-in-law and a visiting archaeologist, an expert on succubi on his side.

Lisa B.
as Lillith

Kathleen Noone
as Betty

Valentin Popescu
as Bob, the Complaining Neighbor
View All

There are no critic reviews yet for Serpent's Lair. Keep checking Rotten Tomatoes for updates!

There are no featured reviews for Serpent's Lair at this time.