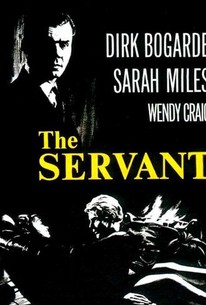 Critics Consensus: Thanks in no small part to stellar work from director Joseph Losey and screenwriter Harold Pinter, The Servant strikes at class divisions with artful precision.

Critics Consensus: Thanks in no small part to stellar work from director Joseph Losey and screenwriter Harold Pinter, The Servant strikes at class divisions with artful precision.

Critic Consensus: Thanks in no small part to stellar work from director Joseph Losey and screenwriter Harold Pinter, The Servant strikes at class divisions with artful precision.

Wealthy wastrel James Fox hires insouciant cockney Dirk Bogarde as a valet. No sooner has he donned his working clothes than Bogarde begins exercising a subtle but insidious control over his master. Suggesting that the house could use a little fixing up, Bogarde convinces Fox to spend a whopping amount of money on it. But this is just a warm-up session for Bogarde, who by mid-film is calling all the shots in the Fox household, all the while pretending to keep his place. Fox's fiance Wendy Craig sees through Bogarde's game. Bogarde then brings his own lady friend Sarah Miles into the house. At Bogarde's insistence, Miles seduces Fox, thereby loosening Craig's hold on the confused young man. And so it goes. The homosexual subtext of The Servant disturbed some of the more hidebound critics of 1963; Harold Pinter based his cryptic screenplay on a novel by Robin Maugham. ~ Hal Erickson, Rovi

Brian Phelan
as Irishman in Pub

Philippa Hare
as Girl in Bedroom

Colette Martin
as Her Friend

Joanna Wake
as Her Friend

Harriet Devine
as Her Friend

Alison Seebohm
as Girl in Pub

News & Interviews for The Servant

Five Favourite Films with Bill Nighy
The Weekly Ketchup: "Indiana Jones" Is Back, "National Treasure 2" Gets A Name, "Mr. & Mrs. Smith" To TV, And More!

View All The Servant News

Critic Reviews for The Servant

The drama is masterfully done and exquisitely played...

The film on its most meaningful level is acid splashed into the wound of class distinction. But it is best enjoyed simply as a slick, spooky, frequently spellbinding study of corruption.

Even at his worst Losey is never dull, and here he is pretty consistently at his best.

The viewer is left with not only a portrait of the haves and the have-nots, but a glimpse of what such social stratification provokes -- an all-consuming madness as powerful as it is hidden.

Losey does masterly work in confined spaces, and Bogarde's performance as the scheming servant sets the standard for sly corruption.

With Losey exiled from America by the Hollywood blacklist, and Pinter the bristling voice of young London, the film has the glee of outsiders mid-gatecrash.

Catherine Bray
Film of the Week

A superb performance from Bogarde, this icy but complex character maintains the homoeroticism of its origins, even if it doesn't play them out literally.

Bogarde, proving not for the first time that he was a whole lot more than just a pretty face, brings a real subtlety and edge to Barratt, letting just enough of the Machiavellian glint through to let us know there's more to this than first appears.

The Servant is a masterpiece. A brilliantly acted and beautifully shot drama which tackles class and power dynamics, all to a backdrop of bristling sexual tensions.

...one of the great iconic British films, although, for once, there's not a shred of patriotism or jingoism to be found...

This script is a masterpiece of homosexual antagonism. Or is it merely class enmity?

Audience Reviews for The Servant

well i can only say this blew me away. losey is a very interesting director, showing flashes of brilliance even in his worst films, and it finally all comes together for him here, with a marvelous harold pinter script and once in a lifetime performance by dirk bogarde. superb

This is a superb, sinister movie of the very highest class. Unlike the character Tony (James Fox) who is upper class without being high class, if you get my drift. You cannot really sympathise with Tony, who toys with some high falutin' development projects but basically is a wastrel just waiting to be ponced off. Tony is a later-day Bertie Wooster. The sinister element comes from the servant (Dirk Bogarde), who is no Jeeves. Barrett, like Jeeves , is a gentleman's gentleman or valet (not a butler as suggested in some other comments on this film). Tony needs a valet because he is incapable of doing anything much without help. Barrett and his accomplice Vera (Sarah Miles) take Tony to the cleaners, sweeping aside the fiancee Susan (Wendy Craig) in their wake. Harold Pinter has written the screenplay in similar vein to the superb movie The Accident, also a Losey piece, which I also commend. The cinematography in both movies is simply excellent. The subject matter of The Servant suits Pinter, although much of the screenplay is not really in Pinter's voice. However, there is one scene, set in a restaurant, which includes a tiny cameo by Pinter himself and which contains a short Pinteresque exchange between two women. There is also one tense exchange between Susan and Barrett "do you wear deodorant" etc. which is very reminiscent of a scene in The Caretaker "you stink from arsehole to Thursday" etc. Indeed the story of The Servant resembles The Caretaker in many respects, except that in The Servant the interloper, Barrett, is on top and stays there, whereas in The Caretaker the interloper, Davies, lacks the skill and circumstances to dislodge the incumbent. There is a homoerotic undercurrent to the film and this works so well because it is an undercurrent (in 1963 there could have been no more than an undercurrent even if they had wanted more). The overt debauchery with Vera and the orgy party towards the end of the film is the only bit of the film that has aged without grace. But I quibble. This is a truly great film and it deserves to be more widely known.

"The Servant" (most noted for it's collaboration between play write Harold Pinter and Director Joseph Losey and for Dirk Bogarde's BAFTA winning performance) is a bit to elusive to truly engage, but it's intoxicating photography, subtly creepy performances and enough homoerotic psychosexual mind games to fill three films, nearly make up for it. It's ending however seems almost too straightforward for it's twisty beginning and middle, but it at least gives you something to think about when it's over. "The Servant" is a dense film, and one that will engage anyone looking for a good mind game.

Let's play master and servant! A subtly twisted trademark Pinter screenplay. Collaboration with Joseph Losey for direction. Bogarde in a polished, sinister, homoerotic role. Film making doesn't get much better than this.