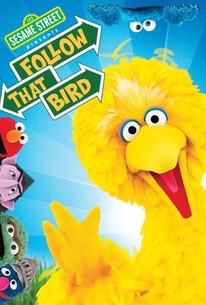 The first film to be adapted from the popular children's television series Sesame Street, Follow That Bird follows the story of Big Bird after a social worker (Sally Kellerman) takes him away from Sesame Street to live with a family of birds in Illinois. Unhappy in his new surroundings, Big Bird attempts to hitchhike back home to Sesame Street. Over the course of his journey he meets a number of odd and charming characters, in the form of cameos by Chevy Chase, Sandra Bernhard, Waylon Jennings, Dave Thomas and John Candy. The music for this engaging family film was written by Van Dyke Parks and Lennie Niehaus.

Jim Henson
as Kermit the Frog/Ernie

Richard Campbell
as Boy with Apple

Adrian McCalla
as Kid at Map

By and large, the script by Tony Geiss and Judy Freudberg and the direction by Ken Kwapis don't strain for yuks; what they seek, and more often than not attain, is a tone of kindly kidding.

If you have kids, check this one out for nostalgia's sake and a chance for them to see the Children's Television Workshop in its younger years.

The series' core values are faithfully reflected in the film.

Good work from Sandra Bernhard, director Paul Bartel, and Hollywood favorites John Candy and Chevy Chase, as well as some fine moments with Kermit, the Cookie Monster, Ernie, Bert, Grover, and many of the other Muppets.

Can't go wrong with a film that features Snuffleupagus!

A movie I watched probably two million times as a child, I am now able to pass it on to my daughter. Hilarious performances from Dave Thomas and Joe Flaherty and a huge list of great cameos. This is one of the essential kid's movies.

This was one of my absolute favorite movies when I was little and I still love it. I haven't seen it in a while so hopefully it'll still be great when I see it again. Yup...still awesome!

Just like the Muppets Movies and Toy Story franchise, Follow The Bird is a good exemple of a cute and sentimental message of importance to have friends. Ken Kwapis made in is picture your best work until now.

A hilarious and cute kids movie that the whole family can enjoy. I loved this as a kid.