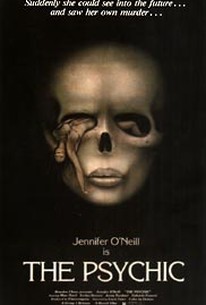 In this Italian thriller, a woman is tormented by morbid premonitions heralding the deaths of people she knows. As she tries to understand the terrifying phenomenon, she remembers her childhood when her mother jumped off a cliff and seemingly died. As the visions continue, she not only sees her own upcoming death, she also gains insight into the truth about her mother's demise. ~ Sandra Brennan, Rovi

The clothes, interior design and general film-making flair are divine.

...a film with a minimal reputation, but has all the depth and detail that you'd hope for in a classic...

A crime mystery where the terror is never far from the surface.

Actually it is not exactly an horror movie, but rather more a thriller (or, better, a giallo). Visionary, tense, well acted (& dubbed), nice locations (villas, interiors, landscapes, cars, etc.), care to costumes and details, a nice 7 notes tune... it is a truly enjoyable little gem from the (not enough) celebrated Italian gore maestro. The plot itself, assuming it is possible to have such supernatural powers, develops convincingly and without too many disgusting bloody scenes . In some points (the visions, particularly the reversed statue) I had the feeling that Kubrick in Shining (1980) might have stolen something (MURDER...). Will it be possible? Oh, I was forgetting, the actress (O neill) is wonderful, and Ferzetti (Once upon in the West, On Her Majesty's Secret Service) is playing as well.

despite all the zooms when she recognizes images, the fun of this movie is trying to piece together the heroine's vision before she does; and the end sequence is great; and both Marc Porel and his secretary show friendship and goodwill to the heroine that usually gets downplayed for the main plot

One of Fulci's last films that didnt involve copious amounts of gore and goo to get the point across. I'm surprised his career didnt turn out differently as he clearly shows he can handle a complicated plot expertly as writer and director instead of the mindless (albeit fun) stuff his name would become synonymous with. It's a bit slow at times but the last 30 minutes really makes up for it as the clues all start to come together to reveal who the killer really is.

A clairvoyant (Jennifer O'Neill) foresees her own demise and tries desperately to prevent it... The resulting film, known as Seven Notes In Black in Italy( the title I prefer) and the less imaginative moniker of The Psychic in the U.S., was not a commercial success, though it was one of the director's personal favorites. I finally got a chance to see the uncut DVD of this Lucio Fulci movie and it is worth a look if your in the mood for old school horror/mystery film. The story mixes Poe motifs with elements familiar from the gialli of Dario Argento, but Fulci resists the urge to be merely imitative. While certain set-pieces definitely echo Argento's Deep Red (1975) notably the scene of O'Neill hacking down a wall to find a woman's skeleton, itself an Argento nod to Poe. the film follows its theme of fate with skill and integrity. While the screenplay is overly mechanical, Fulci compensates for this through sheer technical elegance. The budget is healthier than the films that the director would subsequently helm, and it's all to be seen on the screen, the classy locations, elegant compositions and beautiful lighting keep things interesting throughout, even when the pacing flags during the middle act. The film manages a few genuine surprises, and while the ending as stipulated in the screenplay was fairly concrete, Fulci's staging results in a level of ambiguity that allows the viewer to make up their own minds as to what has happened. Jennifer O'Neill (The Summer Of '42) does a great job in the central role. She is a good center to the film and the supporting cast is also more than adequate, with Gabriele Ferzetti (Once Upon A Time In The West), Marc Porel (Don't Torture A Duckling) and Gianni Garko (The Cold Eyes Of Fear) all delivering top notch performances in their respective roles. Garko is given the most to do in terms of having a real character arc, but Porel makes for a charming and charismatic hero in his own right. The supporting cast also includes smaller roles for other familiar Euro-Cult favorites, including Evelyn Stewart (The Whip And The Body), Luigi Diberti (The Stendhal Syndrome), Fabrizio Jovine (City Of The Living Dead) and Bruno Corazzari (Roy Colt & Winchester Jack). The technical credits are all first rate. Sergio Salvati's lighting is some of the finest he would ever provide for Fulci, with whom he would later work on his beloved horror films, including Zombie (1979) and The Beyond (1981). The art direction and costumes are also very classy, adding to the film's gloss. The music score by Franco Bixio, Fabio Frizzi and Vince Tempera includes a theme appropriated by Quentin Tarantino for the first volume of Kill Bill, and while the main titles song may raise a few eyebrows, it's actually a pretty enough theme on its own terms. The special effects work is more variable, with the opening reprise of a bone-crunching moment from Don't Torture A Duckling making one wish Gianetto De Rosi had been available to lend a hand to the production. The Psychic stands as one of Fulci's most capably crafted and intriguing productions. The director's downbeat point of view imbues the production with an air of fatalism, and it compares well to the other giallos flooding the markets during this time