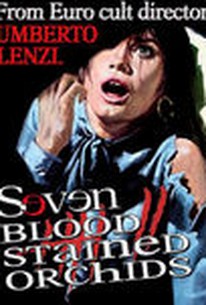 This uneven thriller directed by Umberto Lenzi was the final Rialto Film Company adaptation of an Edgar Wallace mystery (The Puzzle of the Silver Half-Moons), as tastes were changing and the German "krimi" genre was dying in favor of the sexier, bloodier Italian "giallo." In this awkward German-Italian co-production, Lenzi straddles the two genres with confused results. The story concerns a young man named Mario (Antonio Sabato), whose pretty wife Julia (Uschi Glass) narrowly escapes being the third victim of a maniacal killer. The police are baffled, but Julia recognizes seeing the other two victims at an old hotel on the same day several years before. There were actually seven women there on that day, and one of them left the scene of a car accident where an American named Frank Saunders bled to death. Mario tries to find out who the killer is by shaking down a gay heroin addict who later hangs himself, while the police make observations such as "All criminals are out of their minds." The solution is completely predictable, but Lenzi provides some effective suspense sequences and gore to keep it interesting. Pier Paolo Capponi, Rossella Falk, Franco Fantasia, and Carla Mancini also appear, while Marisa Mell plays twin sisters, one of whom is brutally murdered with a power-drill. ~ Robert Firsching, Rovi

There are no featured audience reviews yet. Click the link below to see what others say about Sette orchidee macchiate di rosso (Seven Blood-Stained Orchids)!