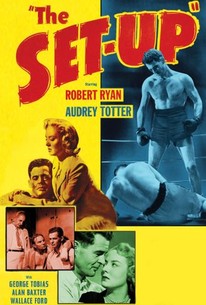 As shown by the clock face that opens and closes the film, The Set-Up takes place within a compact 72 minutes, with the action played out in "real time." Robert Ryan plays Bill "Stoker" Thompson, a washed-up boxer who refuses to give up his career despite the pleas of his wife Julie (Audrey Totter). There's little chance that he's going to win this evening's bout; still, Stoker's manager Tiny (George Tobias) has secretly made a deal with a crooked gambler (Alan Baxter). Stoker is to take a dive, a fact withheld from him until the fight is well under way. His last vestige of pride is aroused in the ring, but the story doesn't end there. The fight sequence is one of the most brutal ever filmed, with close ups of Ryan's pummeled face intercut with shots of screaming spectators in the throes of bloodlust. Adapted by Art Cohn from a narrative poem by Joseph Moncure March, The Set-Up is arguably Robert Ryan's finest starring film.

Constance Worth
as Wive

News & Interviews for The Set-Up

View All The Set-Up News

Critic Reviews for The Set-Up

Its boilerplate fatalism undone by overbearing moralizing and the fact that Ryan's boxer is too one-dimensionally good to register as tragic.

The fight itself is as brutal a bit of screen fare as this writer has ever seen. It's the excuse for the whole picture. You can almost forget the flimsy plot by the time you sit through it -- provided you go in for stark realism.

By the time the last savage punch is delivered, it's well established that prizefighting, as depicted here, is an extremely sordid business.

This boxing and film noir drama, directed by Robert Wise for the RKO, has a few factors that I find interesting, but I don't think it's that great with its plot about the redemption of an unsuccessful boxer. [Full review in Spanish]

Never before or since has a boxing film so thoroughly depicted the sport's fans as a mob of petty and sadistic louts who want their pound of flesh and nothing less.

This is one of the top boxing films ever made, along with Raging Bull and Body and Soul.

Audience Reviews for The Set-Up

Playing in real time, The Set-Up is the story of a washed up prizefighter looking for one last shot at glory. According to IMDb, the screenplay was actually based on a poem about a black boxer named Pansy Jones. The author, Joseph March, was reportedly unhappy about his character being changed to Stoker Thompson, a white man. Unlike most films about boxing, the fight scenes here seem raw and unchoreographed. Robert Ryan (who, by the way, was a boxer at Dartmouth) is completely believable in his portrayal and director Robert Wise manages to make the dark tension of the piece tangible. You can almost feel the punches and smell the sweat.

Tough tight little noir. Lean in the best sense, not one shot is wasted.

a terrific stripped down boxing picture made in real time. robert ryan plays a fighter facing the end of his career. incredible fight scenes and beautifully rendered characters inhabiting their own little world. just great

this film is TIGHT.