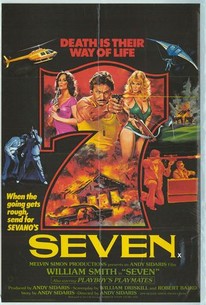 Cycle-flick veteran William Smith stars as the head of a highly trained US intelligence team, each with the requisite invaluable "special talent." Headquartered in Hawaii, the team aims its sights on a powerful crime syndicate. Since the syndicate's henchmen are all martial arts experts, a combination of brawn and brains will be required throughout. The title alludes to the seven mobsters who must be wiped out by Smith & company in order to collect their $7 million reward. One gag in Seven was later appropriated (unconsciously or otherwise) by Raiders of the Lost Ark. ~ Hal Erickson, Rovi

Eddie Parker
as Himself

Ed Parker
as Himself

There are no critic reviews yet for Seven. Keep checking Rotten Tomatoes for updates!

There are no featured audience reviews yet. Click the link below to see what others say about Seven!