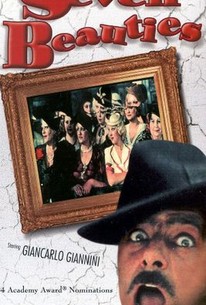 Italian filmmaker Lina Wertmuller directs the black comedy Pasqualino Settebellezze (Seven Beauties). During WWII, Pasqualino Frafuso (Giancarlo Giannini) ends up lost in a dense forest along with fellow army deserter Francesco (Piero De Orio). After they witness a mass execution by German soldiers, Francesco admits his moral opposition to the Nazis and Pasqualino reveals his criminal past in a series of flashbacks. Back in Naples, he was known as "Pasqualino Seven Beauties," a petty thief who lived off the profits of his seven sisters while claiming to protect their honor at any cost. When Totonno (Mario Conti) pimps out his sister Concettina (Elena Fiore), Pasqualino kills him, chops up his body, and mails each piece across the country. He is then arrested and sent to a mental institution, where he commits sexual assault against another patient. Kicked out of the asylum, he is sent to fight in the army. The Germans capture him and he gets sent to a concentration camp. He then plots to make his escape by demoralizing himself in an attempt to seduce a German officer (Shirley Stoler). Seven Beauties was nominated for four Academy Awards in 1977, including Best Foreign Film.

Doriglia Palmi
as Doctor
View All

Its virtuoso style, demonstrating once again Miss Wertmuller's mastery of filmmaking, is used to tell us a story that's very opaque, despairing, and bottomless.

Wertmuller is certainly in the mainstream of European film-making; her work is often cinematically beautiful and sometimes provocative. I would like to see her reduce the sweep of her canvas to explore her central themes in greater depth.

A masterclass in shifting tone. It manages to mingle humor in with the atrocities without trivializing what the Nazis are doing.

Nothing less than a grand statement will serve Wertmuller, yet she never maintains a consistent enough approach to her material to let her message work.

Seven Beauties... clearly adheres to [Lina Wertmuller's] established pattern of creating works which are as frustrating as they are rewarding.

Seven Beauties is the sum of the filmmaker's excesses, flaws, and aberrations. [Full Review in Spanish]

It's a stimulating movie that provokes thought and emotion in perfect cadence.

Although the transitions between times and perspectives and places are exciting and beautifully done, they are really transitions from nowhere to nowhere.

You can't take your eyes of Giancarlo Giannini who sells the film better than it sells itself.

Nominated for five Oscars, "Seven Beauties" remains a singular example of women's cinema grappling with the tattered shreds of war to get at otherwise unspoken truths.

Lina Wertmuller's audacious art-house hit is at once ruthless, sadistic and cynical -- it's also very funny, using its black comedy trappings to unearth laughs where none should exist.

No doubt this was an inspiration for black comedies depicting the war in later decades. The two leads are absolutely hilarious in their mishaps in the midst of such a terrible conflict.

What would you be willing to do to ensure your survival? Would you sacrifice your honor, your body, your soul? Would you murder? Is moral ambiguity permissable during times of war? The opening film footage of Hitler, Mussoulini, the Russian fronteir, and bombings juxtaposed against the narration of a litany of 'Oh Yeahs' provides a context for these questions. If you have prostiuted and murdered in order to live, is yours a life worth living? A brilliant and damning critique!

Though the film gets sort of laborious, I appreciated Seven Beauties for constantly taking risks. It's worth it to check the movie out.