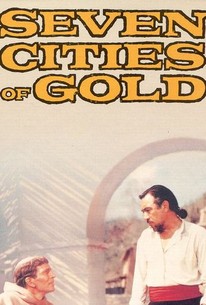 Seven Cities of Gold is the story of Father Junipero Serra (Michael Rennie), the 18th century Jesuit priest who founded the first missions in California. Based on the novel by Isabelle Gibson Ziegler, the film adds a dash of intrigue and adventure to the story in the person of a Spanish military commander (Anthony Quinn) who clashes with the altrustic, peace-loving Father Serra. The tenuous relationship between the Spaniards and the local Indians is endangered when one of the military officers (Richard Egan) betrays an Indian girl (Rita Moreno). To avoid wholesale bloodshed, the errant officer willingly submits to tribal tortures to make amends for his misdeeds. Too melodramatic for some tastes, Seven Cities of Gold is redeemed by the breathtakingly beautiful color cinematography of Lucien Ballard.

Kathleen Crowley
as Mother
View All

Except for one unfathomable ''mystic'' incident which never is explained, this is a good widescreen outdoor drama...

There are no featured reviews for Seven Cities of Gold at this time.