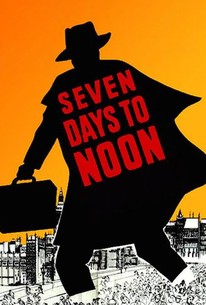 Barry Jones stars as an idealistic British professor working on atomic research. Upset by the apocalyptic ramifications of his work, Jones constructs his own bomb and threatens to blow up London within one week. His terms: Stop the atomic research or suffer the consequences. As London is evacuated, the authorities close in on Jones, using a rather sophisticated form of psychological warfare to trap the unhinged scientist. Seven Days to Noon manages to sustain its suspense and realism the most part, but is slightly undermined by grainy stock footage of London's children being evacuated during World War II.

Frederick Allen
as Himself - BBC Newsreader

Marianne Stone
as Woman in Phone Booth
View All

Another superior item from Britain, the central character being a Godfearing but deranged atomic scientist who vanishes with a stolen bomb and threatens to blow up London. A recommendable thriller for adults.

Seven Days to Noon is a first class thriller with a theme of alarming topicality.

an odd and upending entertainment, one that concludes that those on the opposite side of the world are nothing compared to those at home

Gripping suspense thriller about the possible nuclear destruction of London.

"Seven Days to Noon" starts with Professor Willingdon(Barry Jones) having written a polite letter to the Prime Minister(Ronald Adam) stating that unless he announces the country is disarming its nuclear arsenal, he will set off a nuclear bomb in the center of London at noon on the following Sunday. When Superintendent Folland(Andre Morell) of the Special Branch verifies it is not a hoax, the hunt is on. "Seven Days to Noon" is a riveting thriller that accomplishes a heightened level of realism with a superb use of location shooting while sidestepping some obvious pratfalls like a possible romantic subplot. Along the same lines, it is a wise move not to make Willingdon that sympathetic, as he comes off as somebody who is broken from constantly living under an enormous strain that he cannot share and is not thinking rationally, synbolizing the insanity of employing nuclear weapons. And he also reminds me a bit of Dr. Jekyll from the Bugs Bunny cartoon. "Seven Days to Noon" serves as a valentine to the resiliency of the people of London, living yet again under the threat of a bomb, shortly after the end of World War II. But I would like to disagree with the character of the Prime Minister(and probably also the filmmakers) that the nuclear bombs are necessary(I remember reading in a biography of J. Robert Oppenheimer that the scientists at Los Alamos created an atomic bomb out of fear that the Nazis would build one first and never intended it to be used like it was on Hiroshima) as a deterrent because in the end, the threat from another country never turned out to be viable.

A nice little film about a British nuclear scientist who is driven mad by his work and threatens to blow up London if England doesn't stop making Nuclear weapons. Really well put together and intense. There are alot of great shots of London evacuated. They handle the mad bomber (Barry Jones) very well. He is very sympathetic and the film delivers a good message. All British people are mad and want to bomb London. Lesson Learned.