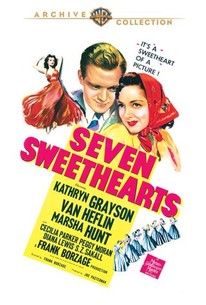 This MGM musical lifts the premise of Pride and Prejudice and plunks it down into the early 1900s. S.Z. Sakall is a restaurateur who has decreed that his seven daughters must marry in order of age -- the oldest one first. Kathryn Grayson isn't the oldest, but she has the sweetest singing voice, and it is she who bags the first husband (Van Heflin). For the record, the remaining six sisters are played by Marsha Hunt, Frances Rafferty, Cecilia Parker, Peggy Moran, Dorothy Morris and Frances Raeburn. Seven Sweethearts was produced by Joe Pasternak, who'd been doing much the same material when in charge of Universal's Deanna Durbin vehicles.

There are no critic reviews yet for Seven Sweethearts. Keep checking Rotten Tomatoes for updates!

There are no featured audience reviews yet. Click the link below to see what others say about Seven Sweethearts!