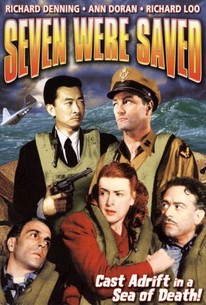 A plane crash over the Pacific leaves seven survivors stranded in a life raft in this war-time disaster movie. One of the passengers is a captured Japanese official en route to stand trial for war crimes. Two of the survivors spent time in a Japanese prison camp. Both pilots survived as did a pretty nurse. The rescue sequences are comprised of documentary footage of an actual rescue by the Air-Sea Rescue Service. ~ Sandra Brennan, Rovi

Critic Reviews for Seven Were Saved

There are no critic reviews yet for Seven Were Saved. Keep checking Rotten Tomatoes for updates!

Audience Reviews for Seven Were Saved

There are no featured audience reviews yet. Click the link below to see what others say about Seven Were Saved!