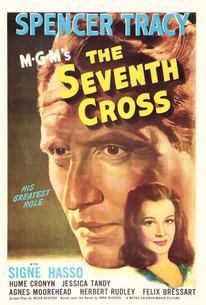 In this drama, seven captives escape from a Nazi concentration camp. After sending the Gestapo after them, the camp's commander has seven crosses nailed to seven trees to await the crucifixion of the fugitives upon their recapture. The crosses are slowly filled, until only George Heisler is still at large.

Critic Reviews for The Seventh Cross

[Spencer Tracy's] acting, always sincere, is consistently compelling, despite the fact that the theme of Anna Segher's best seller "The Seventh Cross," is not without its limitations.

This is a film of fine performances.

If you will accept this premise, despite the evidence of recent deeds, then you should be both moved and shaken by the better part of this film.

With Tracy heading the cast and a host of great character actors in support, it's hardly surprising that the performances are the most memorable aspect of Zinnemann's first major feature.

With Spencer Tracy in the role of the unforgettable George Heisler, the cinema version of The Seventh Cross is one you won't soon forget.

Spencer Tracy's sincere performance in this intense drama about the current war is deeply moving. [Full review in Spanish]

One of the best of the swarms of anti-Nazi films Hollywood produced during the war years.

Spencer Tracy, usually solid, is miscast as a German who escapes from concentration camp, but then the whole saga is fake, compared to Zinnemann's later works.

Tracy is superb, while Zinnemann delivers a powerful piece of work that accurately captures the sense of time and place.

Audience Reviews for The Seventh Cross

There are no featured audience reviews yet. Click the link below to see what others say about The Seventh Cross!